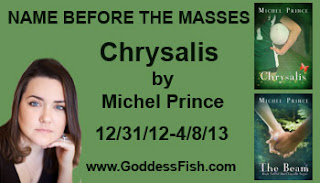 Today we're visiting with author Michel Prince on her tour with Goddess Fish Promotions for the YA novel, "Chrysalis".

Michel answered many of my prying questions -- thanks!

First I’d like to say that my series is mature YA. When I was younger I was never told no on a book so I jumped from middle grade to adult, that mixed with the age range of YA being from 12 to 25 it’s a hard genre to pinpoint. But I do love the extremes that are allowed in YA fiction that isn’t in adult. It’s a time when nothing is certain. Although you can make decisions that will affect you for the rest of your life, most don’t so you get to experiment. The emotions are new and firsts are amazing. Close your eyes and remember the first time you experienced anything, be it a rollercoaster, chocolate ice cream, or a horseback ride. You can never truly get those first back and that’s what makes YA such a fun genre to write.

On the inside of the door the football game schedule poster, pictures of Orlando Bloom, Taylor Lautner, and John Legend. An old camera and her books.

When I was younger I was a Babysitters Club girl. There seems to be a divide in my generation between them and the Sweet Valley High girls. You were one or the other. I loved that each book followed a different one of the girl and you learned about their family and who they were. I could get one and be done in a day or two and there were always more.

Wipeout…I’m sure I’d be sore as heck but to have the bravery to do that is something I’d love to challenge myself with.

Punky Brewster…PUNKY POWER. I even liked the cartoon version.

That’s hard. Vixs from Summer Sisters by Judy Blume, Queen Catherine of Aregon from The Constant Princess, by Phillipa Gregory (although she was a real person I’d like the literary version), Betsy from the Betsy and Tacy series by Maud Hart Lovelace, and Rhage from the Black Dagger Brotherhood. What can I say I like a lively conversation.

Oscar. He’s a Boy Scout and would be able to make us a shelter, get us food and take care of any injuries…oh yeah and he’s hot as hell and gives amazing foot rubs.

What are your favorite pizza toppings?

Pepperoni and Mushroom if it’s a thin crispy crust. If it’s a thick crust I love Domino’s barb-b-que chicken pizza.

Pay all my bills…darn being a grown up. Then an around the world cruise for me, my husband, son and niece. Just don’t tell my niece she’s going to be a babysitter so my husband and I can sneak off every once in a while.

Wow that’s really long because Ellie’s all about the hidden words in music and I actually have a Oscar and Ellie playlist that covers all four books in the series on my iTunes.

The official song for Chrysalis is When I’m With You by Sierra (see my website for a link to this up and coming artist). Now for the ones in the book, Stupid Girls, by Pink, Whoop That Trick, by Terrence Howard, Slow Dance, by John Legend, Take me Away by John Legend, Say Hey (I love you) by Michael Franti, The Sweater by Meryn Cadell, Lady in Red, by Eric Clapton, Halo by Beyonce, Don’t Lie by The Black Eyed Peas, Fallin’ for you by Colbie Calliat…I’m sure I’m forgetting one or two.

Christian Slater…his voice. That deep gravelly voice with the lips that were just a little off center and him in Pump up the Volume…yep he’d have been number one on my go to list.

It was a toss up. I really did like history I just didn’t enjoy the teacher and I learned more from the textbook. Science, loved the teacher…Hey Mrs. Carlson…I like figuring out problems and formulas.

In the annals of dysfunctional families, the Chisholm’s are working their way to the top. Drug abuse, an unwed mother with multiple fathers, and the questionable cash flow for the 'pretty one'. All this from a seemingly normal, two parent middle class family. But were the choices truly made of their free will?

Bad choices are a Chisholm family trait, one that confounds the youngest child, Ellie, who's trying to separate herself by making smart decisions. And falling for Oscar Jeffreys, the hottest guy at school, would be number one on the list of Chisholm family disasters. Yet the crazy part is it’s not a one sided attraction. Somehow Ellie has caught Oscar Jeffreys’ eye. Sure she could see the barriers between them. Race, age, popularity. They were at opposite ends of the spectrum. But a demon set to destroy her family? She can't see that.

Oscar provides security and acceptance Ellie never imagined she deserved. As the passion of first love grows, Ellie honestly believes she has a chance to beat the odds and live a happy, normal life. Then her world collapses around her. With the help of a guardian angel, Ellie learns of a world that has unknowingly surrounded her for years. And she'll have to find strength buried deep inside to save not only her future, but flush out and stop the demon in her midst.

And Ellie will have to learn that sometimes the hardest lesson about growing up is accepting that you're worth more.

Michel Prince is an author who graduated with a bachelor degree in History and Political Science. Michel writes young adult and adult paranormal romance as well as contemporary romance.

With characters yelling "It's my turn damn it!!!" She tries to explain to them that alas, she can only type a hundred and twenty words a minute and they will have wait their turn. She knows eventually they find their way out of her head and to her fingertips and she looks forward to sharing them with you.

When Michel can suppress the voices in her head she can be found at a scouting event or cheering for her son in a variety of sports. She would like to thank her family for always being in her corner and especially her husband for supporting her every dream and never letting her give up.

Michel is a member of RWA Pro and Midwest Fiction Writers. She lives in the Twin Cities with her husband, son, cat and new puppy.

http://www.bookstrand.com/chrysalis-0
Posted by Books in the Hall at 12:01 AM