Tears of the Fallen by K.M.Hager - Virtual Tour and Giveaway 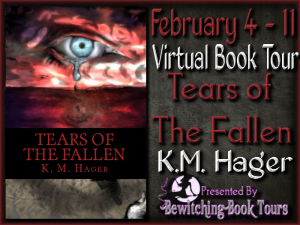 Please welcome author K.M.Hager on her tour with Bewitching Book Tours today for her paranormal YA"Tears of the Fallen". The author is awarding two eBook copies of "Tears of the fallen" to commenters on this stop, so make sure to say hello in the comments -- you could win!!

I used to love a horror series called Point Horror. Hundreds of different books all aimed at scaring teenagers. I loved them, and every Saturday I would use my pocket money to purchase the next book.

I would love to be able to compel people. I would start off by compelling Jensen Ackles to marry me, and then possibly compel ridley scott into turning my novel into movie. All for selfish reasons I know, but my god wouldn’t it be fun.

I’ve just finished reading the Others by James Herbert so that’s sat on my bedside at the moment. It was very disturbing story and even more disturbing when you find out at the end it was based on truth. I think that story will haunt me for life.

That’s hard. I’ve only just read the hunger games series. I read all three books in four days, so I’m probably going to go with the hunger games. I love the way it’s written and the story is so powerful and original that it really transported me into their world.

Celebrity big brother. I’m a huge fan of the show, all the drams and conflicts, I would love it. Plus three weeks away from your ordinary life with lots of champagne and food sounds bliss to me.

Tea, I must drink about 10 cups a day. I suffer badly with panic attacks and I found that one of the causes was the amount of coffee I was drinking. So tea has become my replacement caffeine the only problem I find with that, is I need to drink a lot more tea to get my caffeine hit.

It would have to be Michael, but I can’t say why incase my hubby reads this lol, but you can use your imagination.

That’s easy, there’s only one thing I would love to have the money for and that is to buy myself a small cottage on dartmoor and hide away from the rest of the world, Just me, my family and my laptop.

The script, and I seem to be listening to a lot of Fleetwood mac at the moment.

Tears of the Fallen by K.M.Hager

Genre: YA Fantasy
Number of pages: 250

Amy Coleman on a mission to find her son, the only problem was up until two days ago she never knew she had a child.

Life for Amy is not worth living anymore; she has been brutally attacked; her nightmare of an abandoned child is seeping into her reality. There is only one person who can stop Amy's mission for death, Stephen. However, what Amy doesn't realise is falling helplessly in love with him will just lead her down a dark and deadly path and right into the middle of an angelic war.

It’s only when we get to meet death personally and stare deep into its soul, which we will ever really feel the raw emotion and fear that it brings into our lives. We all think about it, sense when it's coming but like most unpleasant thoughts, we disregard it, choose to ignore the niggling doubts our instincts are so desperately trying to warn us about. So when I walked home that night, taking my usual route across the isolated beach, why didn’t I listen to mine?

I felt danger was coming; my body was trying to warn me that something wasn’t right. The hairs on the back of my neck stood up in protest, as I refused to listen to my gut and take the long route home.

Fear was travelling through my veins, pumping its venom straight to my heart, drowning out the sounds of the crashing waves as the pounding over took. Even so, I was too late, I was nearly at the other end and it would be quicker just to keep moving. The clouds were closing over me and the sun was far out into the distance, ready to rest its tired head for the night. There would be no point turning back now. So I lunged forward towards the exit, desperately trying to get to the stairs so I could take the last step off the cold wet sand and onto the familiar stone of safety. But as I placed my left foot on the step and relaxed my soul, I felt a sharp pain at the back of my head. Suddenly I was flying across the sand, landing directly onto a rock. The pain was crippling, rendering me semi-conscious, unable to focus on any object or stand up and run from whatever force of nature had tried to take my life. I lay there for a minute trying frantically to muster the energy so I could escape the situation. I needed to get home, the blood from my head was trickling down the side of my face and I needed help. My eyes were trying to adjust back into focus, looking for someone to come to my aid, but I could see no one. As I lay on the dampness of the sand, I looked into the night sky and watched with panic as dark shadows emerged and hovered over me as if they were lost souls dancing over my vulnerable body.

In that moment, everything stood still, time and existence froze as I looked upon the lost souls waiting eagerly to take my life. A life I hadn’t really lived yet. Only 16 and there was still so much left to do; finish my exams, smoke weed, kiss Peter Jackson (the high school hunk) or even make love. Then all the thoughts were gone, all that was left was acceptance; that this was my time. There was no way out of it so I just closed my eyes and accepted my fate.

“Oh come on, it's no fun if your eyes are closed.” I jumped, my heart leapt straight out of my chest and slammed back in.

I looked up towards the shadows that had formed a ring around me, dancing delicately over my body and in the centre was darkness, a shadow that had crept out from the night walls and was now lingering over me. A dark energy had my wrists pinned to the ground leaving me paralyzed. I stared up at the silhouette of darkness and I watched with terror as the monster shifted, showing a glimpse of a human face trying to escape through the dark. His head was shaking erratically left to right, revealing his features. Within a split second, a shadow of a man was sat on top of me with deep penetrating eyes, which seemed almost hypnotic but were also filled with sin. They were soulless, without a touch of humanity. He was the devil, the devil on his darkest day.

I woke up with sweat dripping down my face; the silk sheet that lay beneath me was soaked through. I sighed, it was just another nightmare. It had been seven years since I was attacked, but the monster was still living on in my mind, tormenting my dreams and destroying my soul. I looked down towards my wrists, desperately trying to see any evidence that he was back. The imprints of his fingers were still pounding against my skin but there was nothing there, just the scars to remind me of the pain he put me through.

Panic was starting to escalate through my body and there was only one way to alleviate it, to stop the dreaded fear taking over my soul and that was to drink.

I reached over to the vodka bottle that was securely hidden away from my mother’s disapproving eyes and gulped the remainder of the poison that was slowly killing my body. I knew I needed more. The clock on the wall read 9.13pm, which gave me plenty of time to get to the shop if only I could just get passed Mum. I chucked the denim jacket over my shoulders and made my way down the stairs.

I may have been 23, but Mum kept me more wrapped up in cotton wool now, then she ever did when I was a teenager. I don’t even think it was because of the attack. I think it was because of the day she found me semi-conscious on the bathroom floor, surrounded by a pool of blood. I had become the danger to her now. It was so hard for me when I was attacked, not only had I been raped, but my innocence was snatched away from me.

K.M.Hager lives in Devon with her family. When she's not being a mother or a referee to her two children, she tries to get on writing her Tears of the fallen series.