The Ruby Curse by Makayla Yokley - Virtual Tour and Giveaway 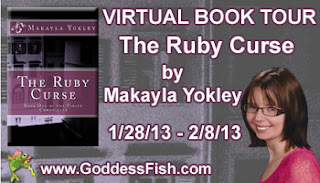 Today we're visiting with author Makayla Yokley on her tour with Goddess Fish Promotions for the Young Adult Steampunk Fantasy, "The Ruby Curse".

Makayla will be awarding a free digital copy of The Ruby Curse via Smashwords to one commenter at every stop, so comment today AND follow her tour (if you click on the banner above, it'll take you to a list of her tour stops)! The more you read and comment, the better your odds of winning. You could be introduced to a great new author AND win a very cool book!

Makayla answered all my prying questions -- thanks!

Violet’s locker… goodness, I almost don’t WANT to know what she would have in there. If I had to guess, it would probably be stuff she stole from other people. Shiny pieces of jewelry, homework completed by other people with their names crudely scratched out and her own written in its place, lunch money she pickpocketed from the football team… stuff like that. There might also be a few spare hair ribbons tucked away somewhere in the back behind the books she’s never opened and the calculator she is convinced is possessed because it kept giving her the wrong answer. It’s the kind of locker that Ethan would try and clean out every opportunity he could get, only to have it cluttered back up in the span of a ditched class.

A Series of Unfortunate Events, without a doubt. I love the way he follows the terrible lives of these children who, despite their circumstances, never give up. They keep on fighting even when things seem the bleakest and they know they can depend on each other for love and support even when the rest of the world is devoid of it.

Now that’s a clinical, adult view of it. Had you asked me why I liked it when I was a kid reading it in class, I probably would’ve just said “I don’t know, I just do” or something like that! It’s also fair to say I like the witty, unusual language that Lemony Snicket uses in the novels that makes it all that more engaging.

Hunger Games. DEFINITELY Hunger Games. There is just so much more story to that one and it actually feels like its worthy of as many books as it has. While I found “Mockingjay” a little dull, I still knew it was part of the plot and necessary to wrap up the bigger picture. Twilight… it could’ve (and definitely should’ve) stopped at one book and have been at least halfway respectable. While I applaud Meyer for her business sense and ability to come up with an idea that is easily marketed to tweens, I think Collins has a base story that is more worthy of multiple novels.

It’s a tie between Bridezillas and Survivor, I think. Bridezillas would offer the base security and ability to be nonathletic and nonsocial that is needed to get any kind of far in Survivor without being accused of “riding on coattails”, but I’d also have to learn how to be a raging bitch. I wouldn’t be able to do it without apologizing profusely to anyone I was cruel to, even if it was just a fraction of the cruelty the girls on the show have.

Survivor would be fun just for the basic fact that it’s a show most of my family likes and that I like, and I’d like to see how well I would do. Other than that I’ve got no business being there. I don’t like bugs, snakes, anything like that, and I’m not a good liar at all. I’d never be able to form multiple alliances and keep them all straight in my head. It would eventually turn out like the end of the old “Stepfather” movie (The one that has Terry O’Quinn in it) when he’s starting to prepare for the death of his current family and is establishing himself in a different neighborhood. His wife (who he’s about to kill) confronts him about why he quit his job, and he starts acting all angry, saying “I won’t stand for this! They can’t treat [his new name] like this!” and when his wife called him on it, he got a blank face and asked “Oh yeah, who am I here?” That’d be me trying to keep ANY alliance straight or ANY of my lies. It’s better for everyone involved that I just stay out of Survivor all together, I think.

Sailor Moon and it still remains one of my favorites even if it’s a little childish to say. The English version is terribly annoying, but if you watch the Japanese version it’s MUCH better. When it was brought to America a lot of the original Japanese content was censored out to make it more appropriate for children. The reason I still like the show, I think, is because it’s actually really dark if you’re allowed to have all the original content in it. A lot of the scouts die in ways that are actually surprisingly brutal, and easy going Usagi (Serena) is quickly darkened by all the troubles she must fight through as Sailor Moon. That’s one of the reasons I like it, it gives the kind of story that I enjoy. A story of a supernatural war being fought by young people who are unable to have normal lives because they need to be the “good” in a quintessential “Good Vs. Evil” story. It’s one of the biggest influences theme wise in “The Ruby Curse” and “The Violet Chronicles” in general. Youngsters who must do what is right despite how terrifying it is, and how quickly it forces them to grow up if they want to survive.

Ethan. Definitely Ethan. Not only is he good at cooking, but he’d be able to build us a shelter and scavenge the jungle for food (assuming, of course, there IS a jungle. If there isn’t, he’d make an excellent fisherman). If that’s not a good enough reason to choose Ethan, it definitely helps that he’s a fairly attractive man and what woman wouldn’t want to be stuck on a desert island with an attractive man with the ability to find food for her and build her a shelter when she’s too… sheltered to do it herself?

I love questions like this! I’ve been building my playlist for “The Ruby Curse” for years, and even used it as a journal entry when I was taking an English class last year!

Okay, so here’s the playlist for “The Ruby Curse”!

I think that’s it!

Thanks for stopping by, Makayla!

Heroes come in all shapes and sizes... though they're not usually escaped convicts. Seventeen-year-old Violet Seymour is the only person to ever escape the highest maximum security prison in the steam-and-clockwork powered nation of Arcova. She is also a link in an ancient bloodline of heroes. When mages start going missing, Violet is the only person who can find them.

Off to one side of the path was a large curved wagon made out of polished brass and gold colored metal. The wheels on the side were comically large in the back, which made the normal-sized wheels in the front look disproportionally small. A black horse with white spots peppering its back grazed a few feet away, leisurely munching on the grass and soaking up the sun. As we advanced on the wagon, the horse did little more than lift its head in our direction.

Back towards the edge of the forest was a woman picking flowers. Long brown hair twisted into clumps cascaded down her back, moving stiffly against the colorful beads interwoven among the hair. She wore a long brown skirt that breezed around her delicate ankles when she stood up, revealing a pair of dainty black shoes with no heel. She turned around, cradling in her arms a bundle of droopy purple flowers with yellow centers and fat red berries hanging off the stems. A brown bandanna was tied around her waist, a red one around her neck, and another red bandanna held her hair away from her face.

From behind the dreadlocks I saw the woman’s pointed ears. She was an elf as well as a mage. Double-whammy when you consider how much people hated both elves and mages.

Her black lips spread into a toothy grin when she saw us.

Makayla Yokley is a college student who lives in Kansas with her somewhat evil cat named Cujo. She likes to write fiction of all genres. Currently she is majoring in Liberal Arts.

Where to find me:

Buy a copy of “The Ruby Curse” at: