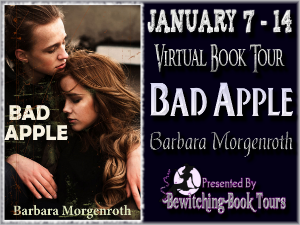 Please welcome author Barbara Morgenroth on her tour with Bewitching Book Tours today for her mature YA"Bad Apple".  The author is awarding an eBook copy of "Bad Apple" to one commenter today, so make sure to say hello!

Thanks for answering my questions, Barbara.

I love YA with all my heart because the readers are willing to confront the difficult topics adults would like to skip. I can write about important life issues, situations with filled either emotional or physical danger then follow it with humor, and the audience can easily put it all in perspective. Adults are much more demanding that a book be one thing and one thing only. Having drama and humor in the same book tends to throw a lot of adults off-track. If anyone can explain it to me, please do!

First, I wanted to be a top equestrian rider because I loved horses so much. However, I was still so young I didn’t realize you need hundreds of thousands  What did you want to be when you grew up? Why? of dollars to do that, so eventually I said “Okay I’ll just have horses and become a photojournalist.” I wanted to travel the world and share that experience with others. That didn’t exactly happen either but I travel the worlds of my characters in my mind and share that experience with others, so I’m close.

We won’t talk about what’s in the Nook or the Kindle which are on the nightstand. We’ll talk about paper books. I’m reading the biography of Ruth Harriet Louise, a portrait photographer for the Hollywood studios in the early days of film making. I’m still a photographer and I love getting the inside scoop of how people lived their lives. I could be called nosey, but I don’t mind. Underneath that is the biography of the great Hollywood producer, Irving Thalberg.

All my fiction reading is digital at this point.

I guess I have to say I Love Lucy even if it is before my childhood. I watch it every time it’s on. I still laugh at the same jokes. It cracks me up to see Lucy that first day in Hollywood finally meet Bill Holden and she lights her fake nose on fire, then Ricky’s eyes get so huge (you need that reaction shot). I know the dialog since I must have seen each episode a hundred times but it was so beautifully written, produced and acted that it stays fresh.

Like a bottle of spilled ink, one act of evil can spread through lifetimes, staining, as the darkness leaches outward in an ever- widening pool.

That’s a great question and it gives me the opportunity to put two of my favorite ice cream flavors together. Mango Ginger. That would be the perfect ice cream! Could we put some chopped cashews or pistachios in there, too?

I would buy a small horse farm with lots of pastureland someplace where it’s sunny and warm most of the year. I would donate the rest to animal rescue. Then I would continue to keep writing.

I loathed high school! I spent most of my time writing stories and dumb poetry. I was in denial as much as possible. I was so bad at math—undiagnosed dsycalcula—that they sent me to an extra art class. So I guess art was my favorite class because it got me out of geometry but you have to understand that I didn’t want to be there, either.

“You tell and next time you won’t even be able to crawl away.”

Neal Marchal lived with this threat for the next eight years. When she finds her neighbor murdered, she knows who did it. The why is the secret the family has been keeping forever. The reminder to never reveal the secret is her limp.

She rebuilt her life and now Neal has everything to live for—music, performing and a growing affection for the young man who pulled her to safety.

Then Joe comes home. Neal knows Joe’s going to finish what he started 8 years ago because she told. But this time Neal vows the outcome will be different.

Barbara was born in New York City and but now lives somewhere else. By now, she thinks of herself as a country girl and knows more about gardening and animals than how to ride the subway.

Starting her career by writing tweens and YA books, (and did the cover photography for her first two books published by Atheneum so continuing to do the covers to her ebooks is predictable), she was actually aiming at the small screen. Television seemed like the perfect place for her even if she had no clue how to get there. Life is funny and often presents opportunities. Advice--Grab Them! Through a neighbor, Barbara wound up getting an introduction to a lower honcho at ABC and an audition to write for them. Her hopes were more than dashed, they were disintegrated, evaporated, demolished when ABC couldn't find a place for Barbara on General Hospital. (No Luke and Laura in her future!) To ease the crushing disappointment, Barbara wrote “In Real Life I'm Just Kate” about a 17 year old girl who becomes a star on a soap opera. That became an open sesame moment and shortly thereafter Barbara became the last headwriter for NBC's daytime serial, The Doctors, where she was ordered by the network to kill Alec Baldwin, shooting him not once but twice. With two different guns. From different directions.

You can read the book that started Barbara’s television career as the Kindle YA ebook, “Just Kate”, now with a substantial tweak because living life made her smarter.

You can also read about some could-be-hers-could-be-rumors experiences gleaned during Barbara’s stint in daytime television in the Kindle romantic comedy, In Under My Head. Barbara is a recipient of a Writers Guild of America Best Writing Award for her work on One Life To Live.

Whether you're looking for a Mature YA or a romantic comedy, Barbara has a book for you!

www.barbaramorgenroth.blogspot.com
www.facebook.barbara.morgenroth.5
Posted by Books in the Hall at 12:01 AM