This post is part of a virtual book tour organized by Goddess Fish Promotions. The author will be awarding a $25 Amazon/BN GC to a randomly drawn winner. Click on the tour banner to see the other stops on the tour. 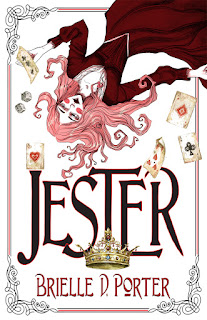 What happens in Oasis, stays in Oasis.

Lisette’s father killed the King. His execution leaves Lisette alone, disgraced, and without the magic he intended to pass on to her. In Oasis, that’s a problem. Glutted with enchanted performers, Oasis is a sin city where courtiers pay in gold to drink, gamble, and above all, be entertained. To survive on its competitive streets, Lisette peddles paltry illusions in place of magic.

Desperate to prove herself, Lisette enters into a deadly competition to be chosen as the highest-ranked magician in the world, the Queen’s Jester. But her rival, the irritatingly handsome Luc, possesses the one thing Lisette does not―real magic. Lisette will do anything to win, but when evidence implicating the Queen in her husband’s murder surfaces, Lisette must choose between redeeming her family name, or seizing the fame she’s hungered for her entire life.

Even though the knife feels like it’s blistering my palm, I take a moment to pan the audience. This is always my favorite part. The tension is a palpable thing, visible in held gasps, wide eyes, and awe.

And that’s when I see him. Expression carefully neutral, almost bored, one eyebrow raised, arms folded across a suit that costs more than my father made in a year. A seeker.

My heart pounds, as I realize more than Stefan’s crotch is at stake here now. If I nail this, that pretentious clown in a suit has the power to get my act in front of the queen. I could be the next Jester. It’s the reason I’ve come here tonight, the same reason I’ve performed for thousands of crowds like this one.

Sucking in a breath, I hold the knife level.

Stefan thrashes, but the binding’s pinning him to the wheel like a dead butterfly hold. Right as I pull back to throw, there’s a shout. “Kingkiller!”

The knife slips in my grip, but it’s too late. I watch, horrified, as the blade wobbles in the air, the trajectory off. It clatters to the ground a few feet away from Stefan, flames smothered in the dirt. There’s a moment of shocked silence, as though the crowd is waiting for me to do something.

Make a joke. Throw another knife. Something. I can still save this.

Even Stefan gawps at me as I stare unseeing at the crowd. But I don’t do anything. I just stand there, the word pounding in my head, over and over.

Even real magic couldn’t save me now. 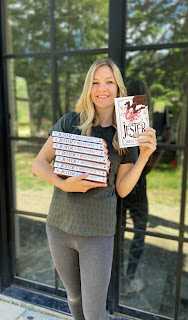 Brielle D. Porter decided to become a writer after a well-meaning elementary school teacher told her she had a gift for it. Stolen moments under the covers reading anything from Harry Potter to William Goldman solidified the desire to tell stories herself one day. Jester is her debut novel.

Brielle lives with her husband and three sons on a lavender farm in Northern Idaho. When she’s not writing, she can be found running and beekeeping. Only ask her about her hobbies if you have plenty of time to spare.