The New Enchantress by Sunayna Prassad

The idea of my MC came into my mind when I was nearly 16 while taking a shower. She is based off of a childhood imagination character that I liked to think about a lot.

I enjoyed books by Roald Dahl when I was in 3rd grade. In 8th grade, I got myself into Harry Potter and would only read those books for pleasure.

Not to publish prematurely. Despite what others told me about a novel that I yearned to publish, I did not believe them and published it anyway (with my parents’ consent, of course). But then it backfired when I only received negative reactions to it. So, once I turned 18, I removed the book from the market.

I used to get candy. Now I get neither. Rather, I receive other special gifts, such as jewelry.

“The Fairly OddParents” was my favorite. I not only enjoyed it a lot, but also picked up on details and inconsistencies.

My MC’s friend, Lily. She is enthusiastic and bubbly. 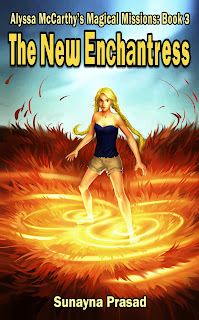 Cursed by a sorcerer’s hex, Alyssa McCarthy finds herself in a fight she can’t afford to lose, or everything she knows will be lost!

After she finishes her final year of junior high, fourteen-year-old Alyssa faces an uncertain future in more ways than one when a sorcerer casts a hex that leaves her with involuntary magical powers that are too dangerous to remove.

Unable to control her newly gained abilities Alyssa’s end-of-middle-school sleepover ends in disaster when she knocks her friends unconscious when her powers go out of control. If Alyssa can’t learn to master her magic soon, she will be cursed to forget her loved ones and serve as the warlock’s slave for all of eternity.

Her only hope is to focus on controlling her emotions if she is to break the curse. However, the difficulties of adolescence, along with the perils and growing disasters she faces, make Alyssa struggle even more. From putting her friends’ lives at risk to losing their trust, she continues to fear what will become of her if she fails.

Will Alyssa be able to break the hex and become the enchantress that she was meant to be, or will she become enslaved to the sorcerer forever?

Alyssa could not risk performing sorcery anymore after ridding herself in autumn of the powers that a warlock had forced upon her. A skeleton called Errol had jinxed her with involuntary magic, landing her in lots of trouble, including near-expulsion from school. He had claimed that it’d been the only way for him to regain his old, human looks. Alyssa had needed to boost her confidence and bravery levels in order to overthrow Errol. That had taken a few weeks.

She would not allow this new hex to force her to remain home all summer. Otherwise, she’d have to miss travel camp at the end of this month and a trip to New York City with Alex in August.

Her palms heated, and beams shot out, bouncing against the ceiling and splitting in different directions. One tipped the bookshelf, and all the books tumbled out onto the wooden floor. It merged with the other shaft, smashed into the desk—knocking everything down—and disappeared in a snap.

Alyssa stared, her fist clenching and her face reddening. Without admonishment, another glimmer flew out of her hands and hit her bed, causing everything to tumble into the air. The blankets crumpled, and a few pillows were tossed onto the rug by the mattress. The ray vanished.

Alyssa gazed into her palms because that catastrophe reminded her of the enchantments she’d performed in the fall.

“Ugh!” She covered her face.

The downstairs door shut, suggesting that Alex had returned from walking Scooter, the yellow lab.

“Alyssa, is everything okay?” he asked.

“No!” She sat on her bed, not wanting to remake it, even though Alex required it when she didn’t have school. I’m never going to get through this stupid mess.

About the Author:Sunayna Prasad enjoys writing fantasy books for children, as well as cooking, creating artwork, watching online videos, and blogging. She has also written The Frights of Fiji and A Curse of Mayhem. She is passionate about modern-day life in fantasy stories, worldbuilding, and even humor. She is constantly brainstorming new ideas and using her creativity.

Sunayna graduated from college in 2017 and lives in New York.