Love Me, Please by Chris Bedell

This post is part of a virtual book tour organized by Goddess Fish Promotions. Chris Bedell will be awarding a $25 Amazon or Barnes and Noble GC to a randomly drawn winner via rafflecopter during the tour. Click on the tour banner to see the other stops on the tour.

I’m currently 27—my Goodreads photo is a few years old. Anyway, the reason a lot of my main characters are 17 is because that age is older than 15 or 16, but not quite a legal adult (18). A duality therefore exists by having main characters be 17—the pull between childhood and adulthood. And that duality is often reflected by having my characters deal with very difficult situations. Unfortunately, teens sometimes have to mature sooner than they should because of issues/events that might’ve happened to them.

Dealing with the death of a friend was very important to Colton’s story. His friend—Declan—was Colton’s one escape from his abusive home life. And the first chapter of the book occurs at Declan’s house, where he’s throwing a party. And the party is where Colton meets Tripp (his love interest in the book). Declan is therefore an indirect catalyst on Tripp and Colton meeting. And as Colton and Tripp get closer, Colton starts to forget about his goal (finding Declan’s killer). But the book does circle back to the identity of Declan’s killer because it’d BE wrong not to give Colton and readers closure.

Ultimately, I don’t find it a challenge not to repeat myself by having books combine love with a mystery element. The uniqueness of each plot is what makes each of my books different. And while all of my books have different plots, there’s the same running theme of dealing with dark/gritty situations, such as with how good people sometimes must do bad/difficult things to protect themselves and the people they love. That’s what makes reading fun, though—that element of make believe. Readers can get lost in something that isn’t real, and hopefully get some entertainment as a result. 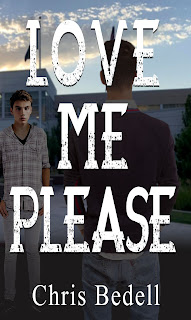 Colton should be like every other seventeen-year-old, hanging out with friends, procrastinating on homework, and dreaming about which colleges he should apply to, but Colton’s focus when he gets home every day is on how violent his alcoholic mother will be. Will he be her ashtray again or worse?

Tripp has the perfect life – handsome, from a wealthy family, and is the football player everyone wants to date. Tripp just wants to date one person – Colton, but he can’t seem to break through that tough exterior and get Colton to trust him.

A friend’s party opens the door for both to potentially get what they want, but it’s that same party ends with Colton’s best friend dead. Caught between wanting to finally find happiness with Tripp and discovering what happened to Declan, Colton discovers that he isn’t the only one who’s kept secrets. How well did he really know Declan and can he trust Tripp enough to let himself believe he’s worthy of being loved?

The placard clinked against the door, and I cocked my head. A group of guys in varsity jackets just entered VERONICA’S. I was more concerned with the guy I locked eyes with, though. More specifically, Tripp. He and his friends just walked by my table.

My throat tightened. Mom’s words and actions weren’t the only thing that would remain burned in my mind for the foreseeable future. I couldn’t forget about punching Tripp and how I wanted nothing more than to apologize for our altercation on Monday.

Gina leaned closer. “What the hell was that about?”

I sipped my caramel latte. “Nothing.”

“I’m not that gullible. I saw the look you guys exchanged.”

“Leave it alone!” I exclaimed.

Gina squealed at me. “I’m serious. That glance isn’t the way you’d look at a friend.”

I resisted making a fist or screaming; it would’ve been a shame to throw over ten years of friendship away just because discussing my sexuality made me uncomfortable.

“If there’s something you wanna tell me, then don’t hold back,” Gina continued.

“I’m bisexual,” I blurted, making sure not to speak too loudly.

Relief trickled through my body. For one moment, my life wasn’t a warzone. I told Gina my truth and said fact fucking mattered. I couldn’t help feeling great. I let someone in, and my life hadn’t imploded. So, maybe there was hope for me yet. 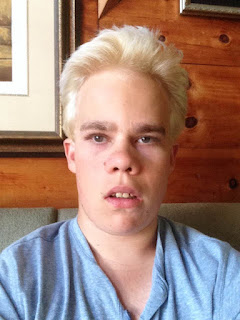