This post is part of a virtual book tour organized by Goddess Fish Promotions. Michael Haddad will be awarding a $15 Amazon or Barnes and Noble GC to a randomly drawn winner via rafflecopter during the tour.Click on the tour banner to see the other stops on the tour.

Elias will most likely not have much in his locker. As a former slave, anything he receives is a gift. He has little to no wealth for himself. Textbooks? He’s mediocre at reading. Jacket? Doesn’t need it. I think a solid pair of winter boots would be at the bottom and a few discarded pencils. Other then that, I can’t imagine an exciting locker for Elias.

It took me a while to get through the entire Throne of Glass series, but I loved every moment of it. In my teenage years, I read more dystopian novels than traditional fantasy, books like The Darkest Minds, Variant, Divergent, the 5th Wave, Hunger Games, Legend, Maze Runner, etc. Only in my graduating years did I start to tap into more fantasy worlds. After that, I fell in love with the genre. Recently, Six of Crows is sticking out as my favourite.

I love sour candy. You can win my heart over with a packet of sour gummies any day.

Due to my mild obsession with Greys Anatomy as a teen and my interest in biology, I wanted to be a cardiothoracic surgeon. Unfortunately, I don’t qualify and probably don’t have the academic rigor to achieve that title.

I’ve thought of this countless times, but I would love to be able to instantaneously teleport. Of course, all cool superpowers have their limitations, so my teleportation would be limited to areas I’ve already been to and seen. Also, the farther the distance, the longer the cooldown time between teleporting.

King of Scars has unfortunately been sitting on my nightstand for months. I’ve been preoccupied on my own novel. I haven’t had the chance to read!

Ru Paul’s Drag Race! Why? I’ve been watching the show and that’s all that’s been in my head recently. Do I have any talents like singing and acting? No. Do I do drag? No. Can I apply make-up? No. Do I still want to compete? Yessss kitty girl.

The original Yugioh was my favourite hands down. I was absolutely obsessed with it. I had collected countless playing cards and even received a toy Duel Disk for my birthday many many years ago. I used to play the game so often that now, every time I see it, I become overwhelmed with nostalgia. However, these days the game is much more complicated and I can’t keep track of it. On the off chance I do play, I stick to the classic rules.

Coffee is my favourite. You just can’t go wrong with it. A standard coffee is great all on its own, but you can even mix it with different flavours. The versatility, the deliciousness, and the caffein keep me hooked!

Can someone send me to Bora Bora? An all-inclusive would be fantastic. Thank you! 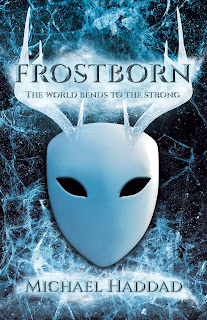 The Frostborn—the one destined to end the war, the one blessed by the magic of Aether—was supposedly nothing more than a hopeless fairytale, a myth lost to time. But as the centuries-long war between the kingdoms of Eljud and Surtrol forces Elias Jökull to evacuate his village, a run-in with the fearsome Gjallarhorn army awakens within him a dormant power long since forgotten by the people—a power signaling the existence of the Frostborn.

With such critical news, hope of victory against Surtrol becomes contagious, yet Elias's former life of slavery leaves him apprehensive about lending a hand to his own flawed kingdom. Even still, knowing the world will soon be in search of him, the newfound Frostborn must choose his allegiances quickly. And after encountering a ranked Surt captain, he does just that.

But while acting as a double agent, feeding intel to Eljud's southern enemy and working both sides of the same border, his conflicted self struggles to anchor his loyalty to a single kingdom as buried secrets begin to unearth.

The incessant clash between the north and south is soon coming to an end and Elias will have to find a side to stand on. The hard question is: which side? Everyone wants the Frostborn for themselves, but for how long can Elias let the world string him along?

She holds the child close to her chest, cradling the head with a mother’s delicate touch. The other infant is nestled in a crib only a few feet away. Winds rattle the glass panes of the cracked window and some of the winter air seeps through. The rough and tattered curtains dance with it—the only movement in the room besides the woman’s near-chattering teeth. She does her best to keep the children warm, but for some reason they sleep soundlessly, soothed by the whistling of the wind.

The woman brushes a gaunt, wrinkled finger along the pudgy cheeks of the bundle in her arms. The shackles on her wrist jangle, anchored down by a bolt at the centre of the room. The tight, unrefined metal leaves behind blisters, but to her it is worth it. The young child’s skin is stone cold to her touch, but soft and full of colour. He breathes evenly and she can feel his pulse just fine when she moves her finger to the child’s neck. He feels dead, yet is as alive as anyone.

“Freezing cold. Ah, but look at these pudgy cheeks. You remind me of those statues in the hall,” she whispers, pinching his face until it is ruddy. “I’d be scared if you weren’t so adorable.”

The woman lifts her head as the sound of rushed steps echoes in the hall outside the door. She hears the jiggle of keys and a mechanical click releasing the lock. The knob turns and the door swings open... 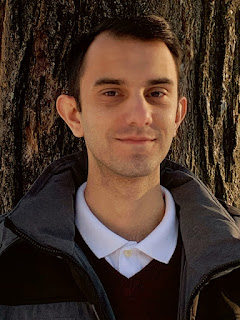 Hardworking university student and recent John Abbott College graduate, Michael Haddad doubles as a fiction author of the fantastic who throws himself into his own writing—who can't stop imagining new worlds, new ideas, new characters. His passion for roleplaying games has earned him his fair share of teasing, but he'd be lying if he said it didn't open his imagination. When not at his computer, typing away, Michael is often with his friends and family, losing terribly at tennis, hunkering down for movie marathons, and trying to get a good night's sleep. As someone born and raised in Montreal, he is no stranger to having ice rinks for streets and snow up to the knee—but that's nothing a warm cup of coffee can't beat.

See the giveaway details at Goodreads.