The Eye of Ra by Ben Gartner

This post is part of a virtual book tour organized by Goddess Fish Promotions. Ben Gartner will be awarding a $30 Amazon or Barnes and Noble GC to a randomly drawn winner via rafflecopter during the tour. Click the tour banner to see the other stops on the tour.

I don’t remember much before third grade, but then the memories flourish around this time. And many of my memories center around books or, more accurately, stories—either ones I read or the ones I made up in my own head. That time in our human development is such a critical time when the brain undergoes rapid development and we’re feeling the world in a way that, in many ways, shapes who we are to become as adults. Kids in this age group have a vivid imagination and a no-holds barred approach to what might be possible in the world. This openness is what attracts me to juvenile fiction.

Ice cream, for sure. I mean, I love chocolate too, but ice cream is by far the winner. Peppermint is my favorite, but that’s a seasonal thing usually, so mint chip is usually a staple. Though I love variety in my ice cream choices as well and have been known to buy whatever the new Ben & Jerry’s flavor might be.

I wanted to be a movie director. Steven Spielberg and George Lucas were my heroes. I bought an RCA video camera---the huge block that sits on your shoulder---and filmed stop-motion scenes with my action figures and choreographed fights with my friends. I tried my hand at scriptwriting at the time, but the format felt odd to me, so usually ended up writing stories instead. Gradually, I faded from directing because I could never quite translate the vision in my head onto film. With that, I gravitated more to books because it lets you imagine the story as you see best, colored by your own life and perceptions. I still love movies, but books are more immersive and engaging.

Oi. In a single phrase, I think I’d say, “This, too, shall pass.” I’m STILL working on not taking myself so seriously. I have a really, really hard time doing anything half-ass. I read someone recently who said they had the same problem, but doing things three-quarter-ass sometimes is probably okay. I’m working on it.

Stopping or slowing or traveling through time. It would be a super power that is so, well, powerful. Flying is great, shooting lasers from your eyes would be neat, but with those skills you’re still subject to the effects of time and cause and effect. With the ability to travel through time, not only could you experience the land of the pharaohs and the first flight of the Wilbur brothers, but you would also have no excuse to ever do anything half-ass ever again. After all, if time is fleeting, you have to pick and choose how to spend it. But if you had all the time in the world, couldn’t you experience everything?

Hiking through the Alps, which I’m actually going to be doing this summer! We’re very excited. I love mountains. They never cease to instill in me a sense of grandiosity that I don’t get with any other natural scene.

English, of course! Reading books, writing, talking about the ideas presented – what’s better than that?! 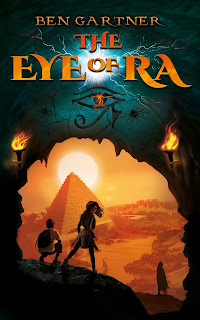 Exploring a mysterious cave in the mountains behind their house, John and his sister Sarah are shocked to discover they’ve time traveled to ancient Egypt!

Now they must work together to find a way back home from an ancient civilization of golden desert sand and a towering new pyramid, without parents to save them. The adventures abound—cobras, scorpions, a tomb robber, and more! The two kids have to trust each other, make friends who can help, and survive the challenges thrown at them . . . or be stuck in ancient Egypt forever.

For readers graduating from the Magic Treehouse series and ready for intense action, dive into this middle grade novel rich with meticulous historical detail.

“Sarah, where are we?” John asked, frozen in place despite the heat. In front of them was a vast ocean of sand as far as the eye could see. It rolled in carved waves, dunes that sparkled in the low-slanting rays of the sun.

Sarah staggered forward, shielding her eyes from the glare. “I—I—”

It was rare for her to be speechless. And it was kind of spooky, her not saying anything and stepping forward with the jerky movements of a zombie.

“Are you okay?” John followed his sister out into the sand, suddenly very afraid to be even a foot away from her.

“Woo-hoo!” she shouted, jumping into the air in her signature move, arms shooting up in a V shape.

“You’re excited about this?” John snapped. “Sarah, how are we in a desert all of a sudden? Where’s the mountain? The cave?” The incredible moment tickled at his brain, and he couldn’t put two and two together. “Am I dreaming?”

“Yeah,” Sarah said. “Dreaming. We must be dreaming. Together.” She knelt into the sand, picked up a handful, and let it drain out of her fist. “This feels pretty real to me.” She turned around to John as she said it, so he could see the roll of her eyes.

“How could we be in the mountains in one moment and then . . .” He trailed off, watching Sarah’s eyes go up and her head tilt back, taking in something very large behind him. John wasn’t sure he wanted to turn around.

Sarah laughed, her face turned toward the sky, her hand covering her mouth. “So.” She took a full breath. “Cool!”

The curiosity got the better of him. John held his breath and rotated on his heels in the sand. He’d been stunned by the vast golden dunes, but what he saw now made him squeak out a chortle of disbelief.

“What—? How—? Is that—?” John stammered. His finger reached out, pointing to the scene as if maybe he could poke it, like it was a postcard of a giant pyramid and not a real one.

About the Author: Ben Gartner is the author of adventure books for middle graders and thrillers for adults. His writing for both audiences shares an ability to grab readers by their neurons for a thrilling ride, maybe even teaching them something in the meantime. Ben can be found living and writing near the mountains with his wife and two boys.