The Frights of Fiji by Sunayna Prasad

This post is part of a virtual book tour organized by Goddess Fish Promotions. Sunayna Prasad will be awarding a $25 Amazon or Barnes and Noble GC to a randomly drawn winner via rafflecopter during the tour. Click on the tour banner to see the other stops on the tour.

Even though I’m 26, I tend to be more attracted to children’s fiction rather than adult. Just a couple years ago, I started being interested in new adult, but didn’t read much of it.

Classics like “Charlotte’s Web” and “Charlie and the Chocolate Factory” were my favorites in 3rd grade. After reading them for school, I’d read them for pleasure. In 8th grade, I started reading the “Harry Potter” books.

Not to have unrealistic expectations about what you publish. I was constantly told that my writing wasn’t good enough and I would argue back saying that it was good, because I was so in love with my stories. It wasn’t till I published one and it got pure negative feedback that I realized that everybody was right.

“The Fairly OddParents” was my idol. I would go out of my way to watch new episodes. I also wanted to be home in time to catch a certain special of the cartoon.

My MC, Alyssa, who’s gone through a lot in her life. She and I have some similarities, as well, such as how both of us used to take horseback riding lessons, are good with animals, and are quite naïve.

Definitely chefs. Thanks to that class, I expanded my taste buds and tried new things that I wouldn’t have eaten before. One of them is cheese, which I disliked when I was little. 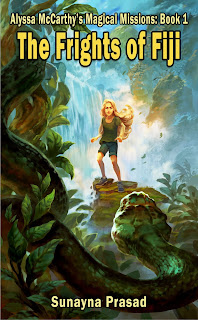 A world of magic and adventure awaits…

Sent to live with her strict, aloof, and uncaring uncle after her parents are killed in a car accident, twelve-year-old orphan Alyssa McCarthy longs for the life she used to have—one filled with fun and love. Then one stormy night, a message appears in the raindrops on the window that will change everything.

"Your life will never be the same again, as magic will interfere."

Before long, Alyssa is kidnapped by Master Beau, a banished sorcerer with a mysterious connection to her who can only regain his power by weakening hers. Suddenly hurled into a world of wizardry filled with fantastical beasts and marvelous technology beyond her wildest imagination, Alyssa must defeat Master Beau if she ever wants to get home again. But Master Beau will stop at nothing, including using Alyssa’s friends, to ensure he is triumphant.

Originally titled "From Frights to Flaws", this story is the exciting and enchanting first book in the "Magical Missions" series.

About a half hour had gone by, and footsteps thumped down the stairs. Alyssa figured out that Mathias had returned via his flying tube since Isabelle had said that he owned one too. Alyssa turned to the staircase and watched him carry a small cage with about six or seven mice. They had white fur with patches of green, purple, red, and blue. Mathias also carried a bag of silver, gold, copper, metallic green, red, and blue fronds.

He entered the living room and sat on one of the couch chairs. He placed the cage on the carpet. But Isabelle bent her eyebrows. “Mathias, don’t put them on the carpet. They’re going to—”

“Still, they’re filthy wild animals, and they could get my clean carpet dirty.” “Oh, Isabelle, stop being such a neat freak,” said Mathias.

“No.” Isabelle turned to Simon, who sat on the other couch chair and listened to his WiPod. “Simon, can you track the snake, please?”

Simon took out his earbuds. “What did you want me track? I didn’t get that.” Isabelle repeated herself, and Simon made his tablet appear. Alyssa watched him press it; he probably programmed a way to track the snake.

“Simon, how far away is the snake?” asked Alyssa.

Alyssa’s stomach hardened as she walked up the stairs. She could even feel her heart throb through her throat. She hurried her breathing and followed everyone else out of the tent.

Alyssa stepped onto the sand and saw something move. She gasped, her muscles constricting to her bones. Her hands shook and cooled down despite the burning sun. Tingles spread through her toes and fingers and expanded to the rest of her body. She whined through her contracted throat. She wished that what she saw was just a mirage. But the smell of the ash hanging in the air revealed to her that she didn’t just see things—the snake drew nearer.

It opened its jaw, exhaling light gray ash. It stuck out its pointy black tongue and pushed its head toward Alyssa, and she coughed. But it sped up its slithering. Alyssa screamed and spun around. She dashed along the beach, and her feet sped up, thus kicking the backs of her legs.

“Alyssa, get back here!” yelled Mathias. “I can’t disappear holding the cage or mice! It’s impossible doing both!”

But Alyssa continued to sprint across the beach. Sand streamed into her sneakers. Sweat even trickled into the neckline of her shirt and her legs.

Something scaly slapped her legs. She flew into the air and screamed. Her body fought against the direction of the breeze, and she landed on her butt.

She moaned and quickened up breaths through her gritted teeth. The snake continued to slither and release ash. Shrieking, Alyssa bolted up and turned around. She headed into the rainforest.

Facing vines, twigs, trees, bushes, and fronds, Alyssa found her way around them. Her legs ached from all the different movements she made. She ran sideways from a tree, jumped over a couple of twigs and vines, and zigzagged around trees and bushes. A trail even lay in front of her.

Alyssa’s thin legs and body kept her energy going, but her legs felt like they’d been clogged with broken cobblestones. The snake kept chasing her, though.

About the Author: Sunayna Prasad enjoys writing fantasy books for children, as well as cooking, creating artwork, watching online videos, and blogging. She has also written The Frights of Fiji, formerly titled as From Frights to Flaws. She is passionate about modern life, fantasy, and world-building. Aside from her website, sunaynaprasadbooks.com, she also has a blog about different creative and entertaining topics, including fiction and writing, called “Sunayna Prasad’s Blog”.

The book is free.