Thea Reeves and the Tear of the Morning by Dmitriy Kushnir

This post is part of a virtual book tour organized by Goddess Fish Promotions. Dmitriy Kushnir will be awarding a $25 Amazon/BN GC to a randomly drawn winner via rafflecopter during the tour. Click on the tour banner to see the other stops on the tour.

I wanted to write a book series that would draw my daughter in. Since my daughter is a teenager, juvenile fiction was the best way to go from my perspective. Before I published the first book of Thea Reeves series, I gave it to my daughter to read as a trial ... she loved it!, so I decided to proceed with the series. I find family to be the best critics, family tends to never hold anything back when it comes to criticism.

Since my protagonist is not really interested in school or the other students that go there, there would be only necessities in her locker like books and miscellaneous school supplies. There would definitely be nothing personal in her locker, since the school is not the place Thea wants to be.

To this day I remember reading Jurassic Park by Michael Crichton. It was really the book that drew me into the world of science fiction. Later on, in my early twenties, it was Dan Brown with his books (although I found his books to be very predictable and always following the same "route").

Hunger Games, no question about it, since it is something that could actually happen and is based in part on reality. I found Twilight to be a modern fairy tale, where a princess is rescued by her prince. Hunger Games is something that is full of connections to the real world e.g. the enslavement of the human race. Hunger Games always hints to the Flat Earth theory, the One World Government theory and some others.

I'd probably get kicked off any reality show. But I'd love to be on a cooking reality show. It is fun to cook and even more fun to eat. I also like to cook with my daughter when I have the time and the opportunity presents itself. So any cooking reality show, I'd definitely sign up. Especially if it would be father/daughter tag team.

Fresh Prince of Bel Air ... I feel like I did not miss a single episode of that show. Although what was interesting and funny back in those days is dull and boring today. I tried to watch Fresh Prince a few weeks back on Netflix ... could not even finish episode 1. Times change, people tend to change with time as well.

Hot chocolate. It is chocolate, it is hot, and there are literally hundreds of different ways to prepare it. At first I wanted to say coffee, but there are definitely way more options with hot chocolate, than with coffee.

I'll jump to book 4 (yes, spoiler) ... I'd love to have the spirit from the mine stranded on the desert island with me. One, I don't have to feed it or share food with it, so more for me. Two, I'd always have someone to have a conversation with. Three, even if I die on that desert island, I'd still have someone to talk to after death.

Nachos! I remember back in late 90s, Dominoes Pizza had a Mexican pizza and it was pretty much a Supreme Nacho Salad on top of a pizza. Like if Taco Bell and Dominoes decided to create a two-in-one. One of the top three pizza's I've ever had, the other two being Philly Cheese Steak pizza and Chicago deep dish.

Pancakes and Maple syrup. I think it would be a great ice cream flavor that incorporates pancakes and maple syrup ... if it's made properly. It would be a perfect dessert for all who love a traditional breakfast.

A better question would be "You've just found a million dollars", since winning a million dollars means you only get to spend about half of it (after taxes) to begin with. I'd spend it on building some small houses and use them as rental properties ... it would provide me a passive income for life. 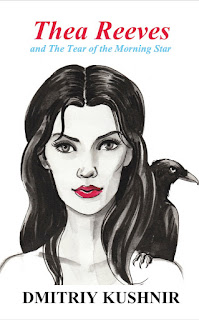 Thea Reeves is an ordinary girl, from an ordinary family with financial troubles, living in a small town of Johnston. After she starts an after school job at The Magic Shop in order to help herself financially, her life becomes more extraordinary with every day.

The girl took her eyes away from the pug and redirected all of her attention toward the raven, who sat just a few feet away from her. She talked softly, so no one, especially not even one of her neighbors or her parents would overhear. People these days may get the wrong idea from just a few misheard words, and the witch hunts and trials can begin again. Women have always been identified as the weaker sex throughout the centuries, and every time a woman spoke out or displayed any kind of strong character, she was met with oppression ... especially from the side of organized religion. Not long ago, Thea learned about Salem Witch Trials a few centuries back, and about how many ordinary women were tried by the church and by their neighbors and were executed. History tends to repeat itself.

I am no longer ordinary. Thea thought to herself, and immediately understood that no longer being ordinary could actually have a negative impact, rather than a positive one.

About the Author: Dmitriy Kushnir is a Sarasota, FL local and is a student of life. In his younger years, he had served in the military and received various degrees from multiple universities. One day, Dmitriy Kushnir realized that he had just too much to share with the world and began writing in the fields of philosophy, business, religion, history, fantasy and science fiction. To this day, he has written more than 40 books under various aliases.