This post is part of a virtual book tour organized by Goddess Fish Promotions. Christine Potter will be awarding a $30 Amazon/BN GC to a randomly drawn winner via rafflecopter during the tour. Click on the tour banner to see the other stops on the tour.

Why do you write juvenile fiction? What draws you to it? I write juvenile fiction because I am the world's oldest young adult. I taught high school English for years, and I have a theory that teachers actually become the age of their students after a while. My husband, a retired elementary music teacher, is a total eight-year-old. Me, I'm about sixteen. I get really happy and really sad like teenagers do. There's nothing, in fact, that I take more pleasure from than watching a group of teenagers get goofy with each other. It just makes me smile.

Pretend your protagonist is at school and opens his/her locker – what will we see inside? Gracie Ingraham is a time traveler from 1962, but she's doing a decent job of keeping that a secret and fitting in. She'd have a mirror for fixing her eyeliner hanging on the back of the locker door; her best friend in 2018 is a nerdy girl named Zoe who lives for the eyeliner wings, and Gracie's trying hard to master them. If it's not too cold a day, Gracie might have her vintage brown corduroy jacket in there, too. Good thing the group she's fallen in with is into collecting old vinyl and upcycling! It's a tidy, spare locker. Gracie's a badass, but she's quiet about it.

What books were your favorite as a youth and why? I liked anything to do with time travel—so A Wrinkle in Time, of course, and the Jack Finney books when I got a little older. Lord of the Rings, of course.

What’s your favorite sweet treat? God, I've never told anyone this before because it's a new thing for me. I love those shops that let you make your own frozen yogurt sundaes—but only if they have the weird little bubbles that pop in your mouth, like from bubble tea. I love mango fro-yo with raspberry pop-in-your-mouth bubbles. I want some now.

What did you want to be when you grew up? Why? I wanted to be an archeologist because my parents' house was built on a plot of ground next to an old resort hotel that had burned down. You could find doorknobs and old silverware if you dug. It was amazing. Sadly, real archeology, I discovered, probably meant I'd have to excavate graves sometimes and that was the end of that. I became a teacher and a writer.

Favorite TV show from your childhood? I like to write time travel, which I guess counts as science fiction, but I don't really think of it as such. But as a kid, I LOVED the original Star Trek. I was a bookish, shy kid, and I had a crush on Mr. Spock.

Favorite hot beverage. Why? Latte. Foamy, delicious latte. It can keep you going for a while if you don't have time to eat. It wakes you up. It is pretty in a mug. It smells delicious. It is nectar!

Which of your characters would you most like to meet IRL? Why? I'd like to meet Bean, who is in all my books, although Gracie's Time really IS Gracie's time; Grace Ingraham is the main character. Bean is an awkward but gifted kid and she grows into a confident boho kind of grownup. I think she'd be fun to hang out with.

You’ve just won a million dollars and you’re not allowed to save any of it. What do you spend it on? A bunch of friends of mine and I run an internet radio station. It makes zero money and we all kick in to keep it going. If I suddenly got super-rich, I'd do over the studios and make it really plush. Either that or I'd buy a house in Nova Scotia and make it gorgeous. I love it there.

Playlist for your current book. Hah! It's a crazy mix. Gracie's from 1962, so she likes old-school folk (like Joan Baez) and The Tokens and rockabilly like Duane Eddy. But her travels crash her into folks who lived through the 70's and like the Grateful Dead—and her friends in 2018 are vinyl collectors who like Bowie and The Beatles, even though it's older music. Fleet Foxes get mentioned. And the soundtrack to Hamilton. 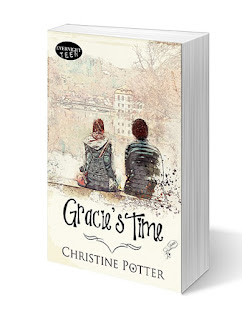 It's almost Halloween, but something a lot scarier than ghosts is on everyone's mind: nuclear war. After President Kennedy's speech to the nation about the Cuban Missile Crisis, Grace Ingraham overhears her parents' plans to keep her safe. She'll be sent off to live with a wealthy uncle—in the nineteenth century.

Gracie's from a family of Travelers, people who can escape into time. Too bad her mom and dad haven't Traveled since their honeymoon trip to the Lincoln Inauguration. So Grace will have to go alone—even though taking a wrong turn can have serious consequences: like heading for 1890, and ending up …in 2018.

I heard a snoring sound in the sky then, but it was only a plane. For a moment I thought about how terrible it would be if a nuclear war started right that minute, before I could escape to the past. Then I thought about Mom and Dad. I hoped they’d come get me from the 1890s if there weren’t a war. I didn’t want them to die. I didn’t want anyone to die. I really wanted there to be a future.

Mr. Mahoney and I walked past the train station and out onto the empty platform. He looked over his shoulder to be sure no one was around. “Are you ready?” He took my hands, squeezed them, and then he let go. “It’s the right time and place! Go on back, Gracie!”

At first, I thought nothing had happened, except then it wasn’t evening anymore. It was morning—and certainly not the 1890s. Nobody named Augustus introduced himself to me.

Dad always told me that if you get confused when you Travel, you should always look at what kind of lights there are in buildings and what clothing people have on to help place yourself. But what I saw only confused me more.

A freezing wind came off the river and cut right through my corduroy jacket. People in puffy grey and brown overcoats stood in clumps, staring at what I first thought were really tiny transistor radios. I learned that same day those things are called smart phones. I’d missed the 1890s by over a hundred years—and in the wrong direction.

A sleek, silvery train roared into the station from the north and everyone got on it but me. Bingo, the future! I’d just broken one of the biggest Rules there is. 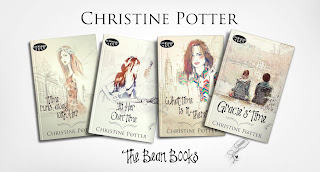 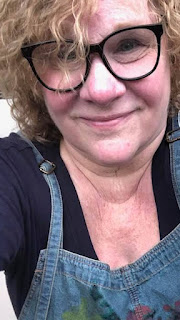 Christine Potter lives in a very old, haunted house, not far from Sleepy Hollow. She’s the author of the time-traveling Bean Books series, on Evernight Teen: Time Runs Away With Her, In Her Own Time, What Time Is It There? and Gracie’s Time. She’s also a poet, with several books in print (the most recent is called Unforgetting). Christine loves all kinds of music, DJ’s, and plays dulcimer and guitar.
Posted by Books in the Hall at 4:00 AM