The Heart's Journey Home by Nikki Jackson - Interview and Giveaway

This post is part of a virtual book tour organized by Goddess Fish Promotions. Nikki Jackson will be awarding a $25 Amazon/BN GC to a randomly drawn winner via rafflecopter during the tour. Click on the tour banner to see the other stops on the tour.

The teens. I just love them as characters. They’re deep and honest and free. They are so open to growth without a whole lot of kicking and screaming. They’re faithful, love deeply and forever. I’m drawn to their dreams and hopes and how they see the world. They believe stuff on a whole different level. They’re not jaded. It’s like they’re invincible. Juvenile fiction inspires me and gives me hope.

The Boxcar Children. This was the first series I read. I was about eight years old and this book series took up a whole shelf at the local library. I was in little kid heaven. I spent the entire summer reading each book in the series over and over again. I fell in love with those kids and reading their adventures swept me up into their lives. I was right along with them in the boxcars going from place to place. I thought that was so magical – travelling across the U.S and never leaving my home. It was right then and there I decided I was going to be a writer.

Okay, I’m not kidding – The Heart’s Journey Home. I was so caught up in writing and re-writing and doing the edits on the book that I didn’t think I had a chance to actually enjoy it so that’s what I’m doing now, reading and enjoying it.

Definitely Hunger Games. Paranormal/Fantasy folks don’t trip out but I was never interested in the whole vampire/werewolf saga. I love strong kick-butt teen females. I love their intensity and focus and how driven they are. That’s what I love about my main character Tori, she strong and passionate and not afraid to not fit into somebody else’s definition or mold of what a female should be. Sure it costs, but she doesn't mind paying the price.

Okay, don’t laugh but Dark Shadows. I would’ve married Barnabas Collins if he’d come by my house and asked me. I loved that show. I had to practically run home from school to catch it. My siblings knew not to even think about having the TV on some other channel. I followed it until the very last show.

While Tori is determined to be independent, life has other plans for her - including coming to grips with some hard and surprising truths.

Atticus Finch from To Kill a Mocking Bird, Tris from Divergent, Michael from The Godfather and Deep Throat from All the President’s Men. Atticus Finch has this carved out morality and a real sense of right. He believes in the law, justice and the basic humanity inside of people. I’d love to spend the evening talking to him. As for Tris, well she’s Tris and I just think she’s bad. I’m inviting her and Michael to dinner for similar reasons. They’re one way at the beginning of the story but they both transition because the situation they’re in demands it, they’re forced to adapt. Michael has the strongest transformation because he was so opposite the character he eventually became. As for Deep Throat – I just want to know who he is.

Easy, Tori’s grandfather - Bo Eaglewolf. He’s an ex-Navy SEAL. He’ll build a spacious two story shelter (complete with furniture), harvest the eatable plants and fruits into an acre garden, create a water purification system, catch, clean and cook all the fish and meat and entertain me with all his old war stories. He will definitely keep me alive and healthy until we’re rescued.

Thanks so much for the interview. I really appreciate it. Readers, keep supporting us writers. We couldn’t do this without you.

It’s summer vacation, and all seventeen-year-old Tori Logan wants to do is hang out with her two best friends, practice her mixed martial arts and go to FBI spy camp. Summer means freedom (mostly from adults) and Tori plans to fill every spare moment of her last summer before graduating from High School with all the fun things she and her best pals can come up with.

Tori, whose mom died of breast cancer when she was young, has always relied on her own strength to get by - especially because her Archeologist father tends to leave her behind with his live-in girlfriend while he gallivants around the world on digs. Thankfully, Tori can take care of herself. She knows exactly who she is and what she wants to do with her life. Her Lakota Sioux grandfather, a former Navy SEAL, trained Tori in self-defense from a young age. Now, as a teenager, Tori excels at mixed martial arts and the use of various weapons. During the summer she will be attending an FBI sponsored Summer Camp which she hopes will lead to her dream job – becoming an FBI serial killer profiler.

With her two best friends at her side, Tori believes she can handle anything. And with summer vacation stretching before them, the trio plans to find plenty of adventure.

But while Tori is determined to be independent, life has other plans for this fierce young woman, and they include coming to grips with some hard - and surprising - truths about both her past and her future.

I could really use a belt. Fin thought as he jumped from the porch, bounding over the five steps. Running down the graveled drive at break-neck speed he cursed the fact he was wearing tennis shoes - that along with the baggy, beltless pants was hemming up his stride.

The sound of shrieks and a male voice yelling at him in a foreign language didn’t help the matter. Fin tripped over his own size 12 feet, rolled and got up running. After gathering his wits about him he heard a muffled roar zoom past him followed by a streak of green. He was unsure of what it was but he was too scared to try to figure it out – he was running now – minus the jeans and a tennis shoe.

Fin all but dove into his Camaro thankful he’d left the keys in the ignition and not in his pants pocket. He turned the key and sped down the drive, kicking dirt and gravel in his wake. In his rear-view mirror he could see the crazy man chasing him with the longest, sharpest sword he’d ever seen.

Making it to the end of the drive, Fin did a complete donut, spun the vehicle around in the right direction and then tore off down the street. Tori had grabbed his errant shoe and AJ leaned down to scoop up the jeans, then the two of them tore down the drive after Fin. 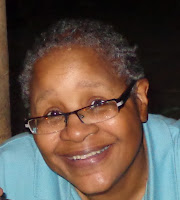 Ever since she was young, Nikki Jackson has loved reading and the way that books allow you to journey on wonderful adventures without ever leaving the comfort of home. She decided at a young age that she wanted to become a writer to enable others to experience the magic of books—and The Heart’s Journey Home is the result.

In addition to writing, Nikki Jackson is a contract worker for General Motors. She and her husband currently live in the Detroit metropolitan area.

Check out Nikki's blog or catch up with her on Twitter.