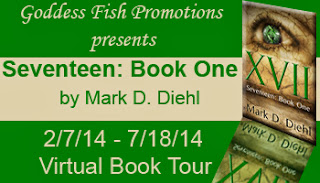 This post is part of a virtual book tour organized by Goddess Fish Promotions. Enter the Rafflecopter below to win a $25 Amazon or Barnes and Noble gift card. You can see the other stops on the tour by clicking the tour banner.


How I handled the research for the book


The premise of “Seventeen” is that, because of the way we live now, with bigger organizations being better able to provide insurance and other benefits and controlling an increasing share of the world’s resources, eventually non-corporate characteristics like individuality and creativity will be eliminated from the human genome.

That is, I believe we are evolving into a corporate species.

As I became increasingly obsessed with the idea, I followed whatever questions arose. Some I could just figure out, like the fact that Japan is clearly the world’s most corporate society. Corporations are at the heart of everything there. I studied some Japanese history, just trying to get a feel for how the culture developed over time, what made it the way it is.

I looked for other cultures that had similar trajectories, similar patterns of development, and I found some similarities in ancient Rome. I realized that there were patterns that endured, things that all of the world’s most efficient societies shared. It became clear that common to all was a rigid and often brutal hierarchy.

That made a certain degree of sense to me. Every army in the world became an extreme, top-down hierarchy in short order, because those that didn’t were wiped out by their neighbors, who through enforcement of blind obedience had transformed into more efficient killing machines. Murder has always been part of life among the humans, but organized, massive campaigns of murder are the result of mind control and a chain of command. True evil began when one man learned he could control the mind of another.

I saw that if I wanted to show how that trend is now continuing (i.e. how corporations and other entities are building militaristic hierarchies), I would need to write a book set in the future. I did research into food production and genetic engineering, to see how people would eat, and I discovered that it’s likely that all food will soon be engineered. That led me to think about other things that could come from biotech, like medicines and even tangible items like furniture. I read about biochemistry and decided that bacteria were the most likely sources of the future world’s food and medicine, and possibly for most everything else, because they’re easy to reprogram and have little else to them beyond protein manufacturing. Splice a few genes, a strain of bacteria starts producing a new substance, and the corporations profit from every bite you take, not by supplying you with the meal, but by owning your right to consume it.

From there I took the story step by step, imagining what would happen in a certain circumstance and then researching parts that I saw would change over time, then revising the original idea to match what the facts had helped me realize.

Most of the world's seventeen billion people are unconscious, perpetually serving their employers as part of massive brain trusts. The ecosystem has collapsed, and corporations control all of the world's resources and governments. A bedraggled alcoholic known as the Prophet predicts nineteen year-old waitress Eadie will lead a revolution, but how can she prevail when hunted by a giant corporation and the Federal Angels it directs?

Mark D. Diehl writes novels about power dynamics and the way people and organizations influence each other. He believes that obedience and conformity are becoming humanity’s most important survival skills, and that we are thus evolving into a corporate species.

Diehl has: been homeless in Japan, practiced law with a major multinational firm in Chicago, studied in Singapore, fled South Korea as a fugitive, and been stranded in Hong Kong.

Author’s Website: http://www.markddiehl.com a Rafflecopter giveaway
Posted by Books in the Hall at 6:05 AM