The Recipe by Maisy Dee - Review and Giveaway 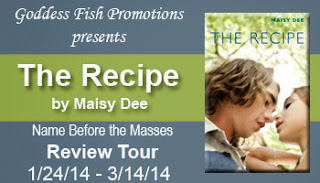 This review is posted as part of a virtual book tour organized by Goddess Fish Promotions. Maisy will be awarding a $50 Amazon GC to a randomly drawn commenter during the tour. Click on the tour banner to see the other stops on the tour.

Craig has pined for Emily since the fourth grade. Imagine his surprise when, when at the start of his junior year, he discovers that she has finally noticed him. When Emily returns to school the fall of her junior year, she finds that her old friend Craig has transformed from a gangly, brace-faced adolescent into a blue-eyed babe who is making her insides tingle.

Craig and Emily stir up a sweet and sexy adventure, exploring new recipes both in and out of the kitchen. But when things heat up on New Year’s Eve, Craig is not sure he can stand it. Is he man enough for Emily? And what recipes have his closest friends Ryan and John been cooking up without telling him?

In alternating points of view, Emily and Craig search for the secret ingredients of friendship, love and intimacy. This isn’t really a book about cooking. Recipes, however, are included.

This book starts off in a sweet way--I love best friends fall in love stories. And this one has a great mix between the romance developing between Emily and Craig and their relationships with the rest of the group. It reminded me a bit of the camaraderie in the old tween series The Babysitter's Club and the Sweet Valley High books. However, the camaraderie the friends enjoy is as far as the comparison goes.

This particular YA pushes the envelope in ways I've not seen before--and it deals with some issues that teens in relationships deal with.

The author does a great job in making me feel the emotions the characters are going through--even though I'm not going to admit how long it's been since I was a teenager! I really enjoyed the story and wondered how Emily and Craig were going to work out their issues. (I also wanted to take Craig and shake him a few times, but...what can I say? Sometimes teenage boys can be clueless.)

However, this book is not a book for younger teens. The characters in this book are seniors in high school---17 years old-- and deal with emotions and experiences that are more mature than the younger set, imho, should read (sexting, heavy petting, and more). But, it might be a good book for parents and teens to read and discuss.

I heard their voices in my dream for the first few moments. The door open and shut, the sound of high-heeled shoes walking around below me. Then I opened my eyes to see Emily’s face next to mine: slack jawed with a little drool on her chin.

We had fallen asleep, and were now lying almost naked together on Emily’s bed, in Emily’s room, with the door open . . . and her parents were home. Kill me now.

Her eyes opened and quickly registered panic. She sprang out of bed and closed the door. We both frantically got dressed.

“What should we do?” I whispered, urgently.

“We need to get you out of here!” she hissed.

“How am I supposed to do that?”

She went to the window, lifted the sash, and stuck her head out, looking for a way down. “Do you think it’s too far to jump?” She had a desperate look on her face.

“No, that’s no good, you could break something. I know, you can just hang out in here until they go to bed, which will be soon, and . . .”

“It’ll work, really it will. We’ll give them time to go to sleep, and then we can sneak you downstairs . . .”

“Emily!” I grabbed her wrists to get her attention, “Emily, my car is still parked in the driveway.”

It was Back to School Night, and my parents were headed to the High School. I looked up from my book long enough to describe all my teachers. For example: “My science teacher will be wearing black chinos pulled waaay too high and a short-sleeved button-down with pens in the pocket. He has Mr. McGoo glasses and a three-strand comb-over. He’s totally weird.”

My parents returned to tell me a) I was grounded until I brought my grades up, and b) I had an uncanny ability to describe people. The teenage me, stressed out from deciding who I was and what I was supposed to do, snapped, “Yeah? Well, what job does that get me?!”

My mother gazed at me calmly. “You could be a writer. But for now, you’re grounded.”

I have never forgotten that moment. I took creative writing classes in college and continued to read a lot, but it wasn’t until I had children of my own that the idea for “The Recipe” came to me. My girls are avid readers, and I spent a lot of time hanging out in the youth room at the public library. I read a ton of current YA novels, and reread books from my teenage years. I began to look for contemporary stories about early sexual experiences that were as honest and non-judgmental as Judy Blume’s Forever. I didn’t find any, but I did find a dangerous mixed message.

On the one hand, overwhelming, irresistible (even paranormal) passion is presented as the ideal romantic experience. That unrealistic expectation, along with all the other unrealistic sexual images they find in books, movies, cable tv, and the internet, is bound to result disappointment in the real thing.

On the other hand, sexually active teen characters in books are invariably punished with pregnancy, violence, humiliation, heartbreak, or a sexually transmitted disease so virulent that it will not even let you die. Yes. If our teens give in to their normal, healthy impulses, they will surely become vampires.

So I decided to write a book about first love and “the first time” that would offer my daughters one story that is a little closer to the truth–things are bound to be less than perfect, and that’s not the end of the world (or the beginning of life after death, no matter what the French call it.) The process was difficult, rewarding, and a lot of fun, and there’s a good chance my daughters will never read it, because who wants to read a book about sex that your mother wrote. Gross.

I’m currently working on my second novel, and yeah, there will be more teens having sex in that one too.

Buy the book at Amazon.
Posted by Books in the Hall at 4:00 AM