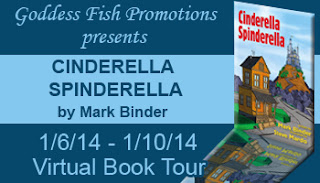 Mark Binder is visiting with us today as part of his virtual book tour for his new picture book Cinderella Spinderella. Mark will be awarding a signed eBook gift card (ePub, Mobi or MP3 audio book) to a randomly drawn commenter at each stop and a Grand Prize of not only the ebook giftcard signed by Mark, but a limited edition cover poster autographed by both the author and the illustrator will be awarded to one randomly drawn commenter during the tour.

Thanks for visiting with us today, Mark. What books were your favorite as a youth and why?

I loved everything Dr. Seuss wrote, especially the 500 Hats of Bartholemew Cubbins. The drawings are distinctive and fun, and the language is crunchy. Bartholemew, especially is a complex character with real problems – which is rare in a book for young kids.

Almond Biscotti called quaresimale made at Scialo’s Bakery in Providence. They’re rock hard chunks of almond, sugar and flour that are amazing dipped in coffee. (They do ship!)

I’ve always wanted to have the power to blow people up like they did in the Roadrunner cartoons, with a big BOOM! And then they’re ok, except covered in black soot. Imagine someone cutting in front of you in the line at the grocery store and then BOOM! And a look of stunned surprise on their face!

Hogans Heroes. It’s a completely weird show that would be absolutely impossible to put on the air these days, but somehow was ok in the 1970s. It’s comedy about a wacky bunch of American Prisoners in a German POW camp. With absolutely no irony.

Coffee. If you have to ask why, then you’re not an addict like me! A few years ago I thought that coffee was making me too angry, so I stopped for a month. Found out I was still angry, but just less productive. So I started drinking again. I bought my wife a new coffee machine for Christmas. She bought me an Espresso machine. We’re ‘Feinds.

I make Pizza (see my audio recording, “The Little Boy Who Hated Pizza”), so I get to put whatever I want on the pizza. I do very creative ones with everything left in the refrigerator. My favorites? Pesto, artichoke heart, mozzarella, sliced mushrooms, feta cheese, fresh tomato, topped with freshly grated real parmigiano reggiano.

I’d book a really nice summer and winter vacation with my family. Then I’d install an incredibly efficient heating system in the house. I’d get my car repaired. I’d donate $100,000 to the Institute for the Study and Practice of Nonviolence in Providence. And then I’d probably run for office with whatever’s left over.

History. I had two amazing AP History teachers. They made the subject come alive by telling the stories.

My sister Ellen from “It Ate My Sister.” Because I don’t really have a sister, and I’d like to apologize for all the mean things I did to her. ;-) 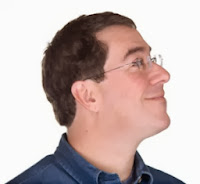 Mark Binder is an award-winning author and story performer and a parent. Over the past twenty years he has shared his Bed Time Story Book series with tens of thousands of readers and listeners around the world live, in print and in audio recordings. His most recent book is Cinderella Spinderella. Read Mark's detailed bio at http://lightpublications.com/about_mark/.