Shade of Red and Blue by Nicholas Lloyd -- Review and Giveaway 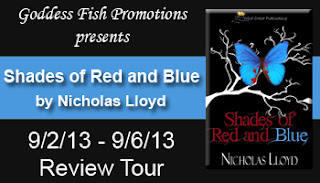 This review is in conjunction with a virtual book tour organized by Goddess Fish Promotions. Nicholas will be awarding a $10 gift card for Wild Child Publishing to a randomly drawn commenter during the tour. Click on the tour banner to find the other stops on this tour.

Amaya is a deeply introverted girl who just can’t manage to interact with people well. Life is hard enough moving to a new school during her last year of high school, but things get even worse when the dark and mysterious Tobias takes an interest in her. There’s a rumor that Tobias was the culprit behind a string of disappearances the year before, which brands him as a dangerous outcast in the town. Almost everyone is afraid to go near him, but Amaya is strangely drawn to him.

As dangerous events unfold, Amaya learns that Tobias is a creature called a Voravi: a powerful being that feeds on human flesh to survive. Amaya quickly gets sucked into a dark, new world. Tobias separates Amaya from her family and friends, claiming that it’s the only way to keep her safe. Is Tobias truly trying to protect her, or does he have more malicious intentions?

Meet the Voravi---they are like vampires on steroids. It's a new breed of the paranormal world with its own rules and differences.

The book starts out slow--and, to be honest, I didn't really care for either of the main characters at the beginning of the book. Amaya, who is the first person POV character, was whiny and I just wanted to slap her at times. Tobias was the quintessential bad boy she can't stay away from.

The more the book progressed, however, the more the story drew me in and, by the time the book was over, I genuinely cared about both Amaya and Tobias, as well as the other Voravi I met in the book. I don't want to give away any spoilers, but this is the first of a series and there is a struggle between good and evil in this book.

I'm looking forward to the next book in the series to see where Amaya and Tobias, along with the others, go next.

"Amaya," Tobias said with a soft expression, "do you remember when I told you that I wouldn't hurt you?"

"What I need to show you will change your life, but I need you to believe me when I say that it's necessary for your safety." He stood beside the door, waiting patiently for me to make a move.

I couldn't see anything inside the next room. It was just a black void.

Despite all reasoning and common sense, I summoned my courage and walked into the darkness.

Tobias followed after me, pulling the door shut behind him with a loud metallic bang.

Darkness enveloped me. My eyes were useless, but I managed to take a few tentative steps forward.

"I'm sure you've been curious about me," Tobias said, his voice slicing through the dark like a dagger. "You must have realized that I'm not like normal people."

"I suppose…" I said, my heart rate steadily rising. I held my arms close to me, as if to protect me from an unseen force.

"Try not to be afraid," Tobias said quietly, practically a whisper. 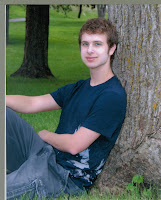 Hello, my name is Nicholas Lloyd. I was born and raised in the frozen tundra of Minnesota. Throughout my childhood, stories captivating me in books, history, movies, and amusing anecdotes. When I was twelve, I discovered a passion for creating stories. My first story centered around the silly adventures of a young boy named Billy. He ran a detective agency, but rarely closed a case due to his short attention span.

I did well in school, particularly in math and science, but that wasn’t the path I wanted to go. It didn’t take me long to realize that I wanted to become a writer when I grew up. Everyone has a story or series that takes them to an exciting new world and changes their life, like Harry Potter or Animorphs. My dream is to write a book or series that will influence people’s daily lives. Whether we read to escape reality or seek to understand it, people will turn to stories. As a writer and an artist, I want to be the one that people trust to accomplish this task.

So far, I’ve written in the genres of fiction, romance, young adult, horror, comedy, fantasy, and paranormal. I prefer to stay within the fictional realm, but I don’t have a specific genre that I’m dedicated to as of right now. The fictional world has been my passion, since I can explore the “what if” questions that wander through my mind.

Currently, I’m attending Minnesota State University in Mankato, working on a degree in creative writing. From there, I’m hoping to attend graduate school and write some truly inspiring stories.

Visit me at nicholaslloydblog.wordpress.com.
Buy the book at Wild Child Publishing or Amazon.
Posted by Books in the Hall at 4:00 AM