The Book of Phinn by Frank Anjakos -- Virtual Tour and Giveaway 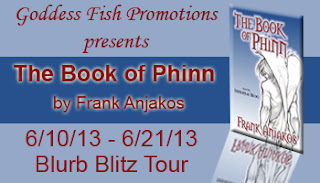 This post is part of a virtual book tour organized by Goddess Fish Promotions. Frank will be awarding a $25 Starbucks Gift Card to a randomly drawn commenter during the tour. Click on the tour banner to see the other stops on the tour.

I'm an Angel. A 16 year old immortal. You don't know me. You've never seen me. Unless you're a dead teenager and you've been good and live in Southern California (narrows it down, huh?). If that's the case, we've probably met. See, I take the souls of good kids to Heaven, but I'm not allowed to interact with the living...which makes high school, being on the soccer team and writing for the school newspaper a little difficult. As an angel, I play by the rules.

My "arch-frenemy" Iszn, the demon who takes the bad kids to Hell, breaks all the rules...which is why he's one of the most popular kids in school. Iszn's hobbies are football, human girls, football, torturing me, football and evil....did I mention football?

Anyway, as an Angel I try not to have any direct contact with humans...well, that is until I met this girl. Actually, until she met me...it's kind of complicated. That's one of the reasons I write my blog...to let you guys in on a world you probably didn't even know existed...until it's too late, anyway.

But this world does exist, and it's about to get complicated. There are some deaths we can't explain and only Iszn and I seem to want to get to the bottom of them. It's going to cost us...a lot, but we can't let it go.

So ya, enjoy the blog...comment if you want. I read all the comments and try to respond. And don't let Iszn freak you out...to my knowledge, he's never actually eaten anyone's face.

Anyway, practice wasn’t the real point of this post…even though that’s what I called it. No, a really weird thing happened AFTER practice. Her name is Ashley Gibbons. She’s a junior…excuse me Junior…not like her mom is named Ashley Gibbons, though she might be…no, what I mean is she is in the 11th grade. And I think she’s probably the most beautiful girl in the school. Not in that hyper-beauty, magazine model way, but in that, smart, funny, sweet, freckled, shy, clever, brown haired, blue eyed, awesome swimmer, not too rich, loves to read, kind of way.

But here’s the thing. I don’t think Ashley has ever been to the soccer field. Until today, I wasn’t even sure she’d know where it was. But today she was there…sitting just outside the fence. Granted, she had brought a book, but I know I caught her looking up from time to time…I even pretended she was watching me play…though I know that’s impossible.

“Great,” I figured, “She’s probably dating someone on the soccer team.” I kept checking to see if she was watching anyone in particular…there were times when I honestly thought maybe she was watching me…how awesome would that be?

But then the weirdest thing happened. When practice was over, we were leaving the field, and I walked right by her, like I always do when I get a chance. She was reading “To Kill a Mockingbird,” and she smelled a bit like vanilla.

Anyway, as I walked by her she looked up…right AT ME!! Then, even weirder, she said “Phinn?”

I stopped dead in my tracks…I looked down to make sure I wasn’t accidentally Appearing (which only happened to me once, like 1500 years ago…again, that’s for another post).

Of course, being the uber-cool dude that I am, I was like, “Uhhh, yeah, uh-huh?”

She laughed, and stood up.

“I came out to watch you practice,” she said.

“Are you like in a hurry, or something?” she asked.

I thought for a moment…a very long uncomfortable moment. You see, I’d never been in this situation before. I’ve been around since…oh….maybe the Dawn of Time? And I’d never really been hit on by a human…or really even spoken to like this…except that one time I Appeared without meaning to. So it was really hard for me to form a coherent thought. Instead, I just stood there, staring, being creepy. It’s entirely possible that drool fell off my lower lip.

“Cool, so you think we can like hang out or something?”

Another long pause, during which I just stood there.

“So, are you going to go change, or shower or something?” she asked.

I looked down, taking in my filthy shirt and scraped knee, which was gently bleeding all over my sock.

“Stellar,” she said, turning and heading off in that direction.

I stood there for a few more minutes, just watching her walk away. What had just happened? Did I have a date? With a girl? A human girl?

As I headed in to take a shower he replied: “As opposed to the girl’s locker room?” 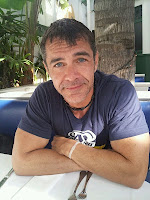 Frank Anjakos lives in the Wild West, where he avoids writing about anything Western. Upon graduation from college in Michigan he was unwilling to get a real job, and so went to law school at the University of Arizona, where he studied listlessly, overcome by the desert heat, and obtained a law degree in the usual amount of time. After recovering from the stifling law school style of writing, he returned to his true passion, fiction…both writing and living it. Coerced by his son Finn, he turned away from adult science fiction and began writing children’s books. Now, if he could just get his son to actually read one.