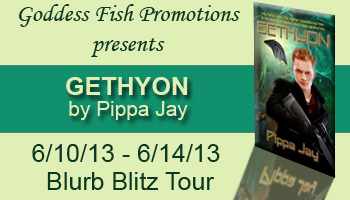 This post is part of a Virtual Book Tour organized by Goddess Fish Promotions. Pippa is giving away two prizes (both are open internationally). One commenter on this stop will receive four bookmarks as well as a $5 Amazon or BN.com gift card. Oe commenter during the entire tour will receive a green crystal pendant charm. Please see the Rafflecopter at the end of the post. Click on the tour banner to see the other stops on the tour.

Abandoned by his mother after his father’s death, Gethyon Rees feels at odds with his world and longs to travel the stars. But discovering he has the power to do so leaves him scarred for life. Worse, it alerts the Siah-dhu—a dark entity that seeks his kind for their special abilities—to his existence, and sets a bounty hunter on his trail.

When those same alien powers lead Gethyon to commit a terrible act, they also aid his escape. Marooned on the sea-world of Ulto Marinos, Gethyon and his twin sister must work off their debt to the Seagrafter captain who rescued them while Gethyon puzzles over their transportation. How has he done this? And what more is he capable of?

Before he can learn any answers, the Wardens arrive to arrest him for his crime. Can his powers save him now? And where will he end up next?

He couldn’t move. His feet seemed pinned to the floor, his muscles locked into rigid immobility. The Siah-dhu howled at him, their voice leeching all will and all power from him. Despite the sparks of power within him, the darkness writhed through his gut, gnawing with jagged teeth as it twisted though his mind. It was hunger magnified a thousand times, as if the vacuum of space had opened up inside him. He fell to his knees.

Gethyon. Not quite a voice, not quite any sound he had ever heard, the Siah-dhu called his name. The roiling mass drew closer. A chill gale blasted over him and snatched all the breath and warmth from him, sucking the life out of him.

“No.” The single word snatched him back from the edge. He hadn’t come so far or lost so much to surrender. As the Siah-dhu pulsed toward him intent on his consumption, he forced himself up again and turned his back on the shadows. It was the hardest thing he had ever done, to resist that pull into oblivion. The edges of the black cloud twined around him, incorporeal fingers striving to grasp him, seething forward to swallow him… 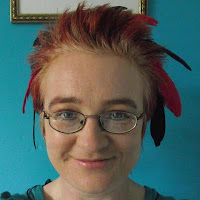 A stay-at-home mum of three who spent twelve years working as an Analytical Chemist in a Metals and Minerals laboratory, Pippa Jay bases her stories on a lifetime addiction to science-fiction books and films. Somewhere along the line a touch of romance crept into her work and refused to leave. Between torturing her characters, she spends the odd free moments trying to learn guitar, indulging in freestyle street dance and drinking high-caffeine coffee. Although happily settled in historical Colchester in the UK with her husband of 20 years, she continues to roam the rest of the Universe in her head.

a Rafflecopter giveaway
Posted by Books in the Hall at 10:36 AM