The After Times by Christine Potter

This post is part of a virtual book tour organized by Goddess Fish Promotions. Christine Potter will be awarding $50 Amazon/BN GC to a randomly drawn winner via rafflecopter during the tour. Click on the tour banner to see the other stops on the tour.

Locker in school…that’s the problem!! My main character is locked out of her school; THE AFTER TIMES is set in the first days of pandemic. She’s going to Stormkill High online. Her bathroom sink has her eyeliner, about ten scrunchies to put back her hair (it’s gotten long and there’s no salon open to help), and alas, two or three masks, which her foster mom is cranking out at the rate of about five per minute on the sewing machine. At least they’re upcycled from cool material!

I loved A Wrinkle in Time by Madeleine L’Engle. And also biographies. I went through a phase where I think I read every biography of every woman who had done something important and some of them twice. Ask me whatever you want about Madame Curie! I also had a Nancy Drew addiction.
What’s your favorite sweet treat?

I do like soft serve ice cream. The really good stuff near me is down on the Jersey Shore. Also, I just made a blueberry-poppyseed cake and it rocks!

I wanted to be an archeologist. Then, when I was about twelve, I realized that I’d probably be excavating human remains, and that totally freaked me out. I think it still would, although I’d love to visit some of the more famous sites—maybe the stuff near Jamestown.

I’d tell young Christine not to let the mean girls get her down—there were plenty in my high school, and I was an early-on hippie. I’d also tell her that it’s okay to love the Grateful Dead and Beethoven at the same time, and that writing stories doesn’t make her a loser.

We live in a very old (1740) house on a dark, winding street through a wooded area. No sidewalks. So alas, no trick or treaters. HOWEVER, when we still lived in our old place in Nyack, we get swamped; my husband and I are both retired schoolteachers. We gave out the good stuff: peanut butter cups. And none of those shrimpy little chocolate bars—real ones.

I’d like to have the power to grant anyone any wish he or she wanted. Sort of a pay-it-forward super power. I don’t like to hog my gifts.

Lady Justice, by Dahlia Lithwick. About women and the law in 2022. It’s enough to make you want to go out and smash the patriarchy starting yesterday.

The original Star Trek. I still can be had for an episode or three. I also really loved Bewitched, which was incredibly pro LGBT for its time, and stands up well. Search it out!!!

Latte, two shots of espresso, no sugar. Because it gets you going and it is delicious.

I like a cabin in Maine or Nova Scotia, a pile of books, my laptop if I feel like writing, and my dear and patient husband to open the oysters. Some local folk music in the local pub. Bliss.

Bean, of course. She’s in all the books. By the end of the series, she’s in her late sixties, and she’s quite the gal. She started out being a bit like me as a teenager, but now she’s got a job as a producer at WNYC in Manhattan and I think she’s pretty smart. Smarter than me, in fact, but she always has been.

Sounds like I’m getting my cabin in Maine! I’d want it fixed up comfortably but not too fancy. Near the water enough for a view, but not in danger of crazy beach erosion. And I’d save out ten or twenty grand to give to World Central Kitchen to feed the folks in Ukraine who lack both food and shelter.

English! My 10th grade teacher modeled to me what a literary person could be—funny, hip, and taking absolutely no crap from anyone. I write and publish poetry as well as fiction, and it was in that class that I first realized I was going to be a poet, too. 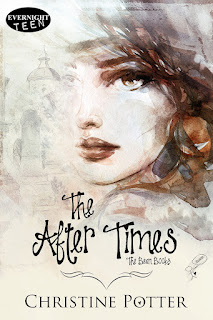 Say you’re Gracie Ingraham, nerdy but happy high school senior. But you’re also a time-traveler from 1962 who got a bit lost and has been living in the 2000’s since 2018. That would be plenty without it now being 2020. Covid has just shut down the world. Your pandemic pod? Your BFF Zoey—and your ex-boyfriend, Dylan.

Dylan still lives to spin weird vinyl LP’s with your sort-of, kind-of Dad, Amp. So your quarantine hobby is going to have to be Being Mature About Stuff.

But then your time traveling kicks into high gear again. And your long-lost brother and mom mix it up with a creepy, pyromaniacal force that is most likely demonic. How can love save the day when you can’t even go downtown without wearing a mask?

I pulled out a note and opened it up. The crease in it seemed sharp and fresh, as if it had just been folded that afternoon. It was on old-school yellow legal paper, torn from a pad, written in unfaded black ink—big letters.

Grace—I’m okay. I really am. Don’t believe everything you see. Mom’s okay, too. By the way, Jesse is a major asshole. Gotta go— Jack.

“Zoey! Claire!” I folded the note back up, put it in my pocket, and ran downstairs.

“Whoa! Those look great on you!” Claire pushed herself up from her chair. “Turn around! Let’s see how they fit in the back.”

“Right. They fit really well.” I spun around. “But this was in them. From my brother!” I pulled out the note and waved it in the air.

I shouldn’t have been as shocked as I was when the paper in my hand burst into flames. I mean, we did have a theme going with that.

I ran to the sink and flung it in. I was about to blast it with water when it turned into a bright blue ball of light, silently exploded, and disappeared without a smudge of ash left behind. It didn’t even smell like smoke. Jack’s note was there—and then totally not there. It might as well have never existed. I leaned against the sink and felt dizzy.

Claire was beside me with a hand over her mouth.

“Holy crap, Grace.” Zoey looked down into the empty sink and then back at me.

“Yeah.” I don’t know why, but I turned on the water and washed my hands then. I’m not sure if I did the whole twenty second thing you’re supposed to. 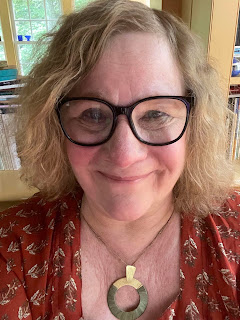 Christine Potter is a writer and poet who lives in a (for-real) haunted house in New York’s Hudson River Valley, not that far from Sleepy Hollow. She is the author of Evernight Teen’s Bean Books, a five book series that travels through time—and two generations of characters. Christine is has also been a teacher, a bell ringer in the towers of old churches, a DJ, and a singer of all kinds of music. Her poetry has appeared in literary magazines like Rattle and Kestrel, featured on ABC Radio News, and sold in gum ball machines. She lives with her organist husband Ken and two indulged kitties. Facebook: https://www.facebook.com/christine.potter.543/
Insta: https://www.instagram.com/chrispygal/
Blog: http://www.chrispygal.weebly.com
Amazon Author Page: https://www.amazon.com/Christine-Potter/e/B001K7URHS/