This post is part of a virtual book tour organized by Goddess Fish Promotions to let you know about the Kickstart Program. Dr. Rachel Kowert PhD will be awarding a $75 Amazon or Barnes and Noble GC or 1 copy each of the 3 Cloud Canyon books (available in November) to a randomly drawn winner via rafflecopter during the tour. Click on the tour banner to see the other stops on the tour.

My inspiration really came from frustration out of what was currently available for my children to read. In 2019, when my daughter was 4 years old,I was lucky enough to pick up about a hundred different paperback books at a garage sale of a former teacher and had started reading her a new book every night before bed. After a few weeks of this, I started to notice a theme: there were very few books with female protagonists and when there were, they were pigeonholed into a damsel in distress or only successfully navigated their challenges with the use of superpowers. While there is nothing wrong with a female superhero or a knight in shining armor, I wanted something different.

After a bit of digging, I realized there was a dramatic lack of representation in children’s literature. The Nielson 2018 book scan report found that of the top 100 best-selling children’s books, 1 in 5 did not feature a single female character, only 2 out of the top 100 featured a black, Asian, or minority ethnic character in a central role ( with 70% of the black, Asian, or ethnic characters were in non-speaking roles) and only 1 out of the top 100 featured a disabled child but they did not speak or have a key role.

Fueled with discontent, I called my friend who runs a small micro press and told her she needed to write or commission some books with strong female characters at the heart of them. She told me I should write them. At the time, this made me audibly laugh! However, after sitting with her words and fueled by her encouragement, I decided to open up my notes section in my phone and give it a try. In less than two weeks I had written what ended up becoming the first collection in the Tales from Cloud Canyon Universe: the 26 stories of Pragmatic Princess. In 2019, I successfully kickstarted these stories as the collection Pragmatic Princess: 26 Superb Stories of Self-Sufficiency and raised more than $25,000 in 30 days and earned an INDIES award for educational children’s picture books. So I guess I can write children’s books.

Over the last few years, I have continued to write and expand the Cloud Canyon universe and am excited to announce that I am launching a second Kickstarter June 4 for a BRAND NEW collection of three topical short stories: Here, There, & Everywhere, Invisible Friends, and The Secret to Success. These stories were the ones that I felt were still missing from my children’s library.

My favorite books as a child were the poetry collections of Shel Silverstein. They were silly and fanciful and some had lessons to teach whereas others were pure frivolity. I still love these collections today.

For as long as I could remember I wanted to be a teacher. This was, at least partially, because I had such wonderful and inspirational teachers when I was younger. I too wanted to share my knowledge and experience with others to help others make their dreams come true. In a roundabout way, I think I did reach that goal!

The candy that I would want to eat! I mean, at least half the bowl gets eaten by my family before it even goes out on Halloween night!

I am currently reading through The Witcher series of books. I just started the second book in the novel series, Blood of Elves.

The Witcher. Not only is this story one of the best fantasy series’ ever written, it provides a truly relatable and flawed protagonist who struggles with mental health and disability.

Warm weather and a good book.

I really love the character of Yanni in The Secret to Success because despite the fact that he struggles to learn new things, he keeps trying (and encourages others to do so as well).

Hermoine Granger (Harry Potter), Arya Stark (A Song of Fire and Ice), Galadriel (Lord of the Rings), Yennefer of Vengerberg (The Witcher)

Who was your teenage crush? Why?

Wesley Crusher from Star Trek: The Next Generation. He was a smart kid, my age, and got to live on a space ship! What is not to love. 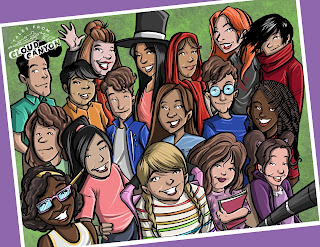 Tales from Cloud Canyon is a series of character driven, topical short stories celebrating the everyday child, doing everyday things, with their everyday abilities designed for children aged 3+. Developed by a research psychologist and mom of 3, these stories were developed to be entertaining, educational, and celebrate the power of the everyday within our the beautiful, diverse world.

This Kickstarter collection features three topical short stories from the Cloud Canyon Universe: Here, There, & Everywhere, The Secret to Success, and Invisible Friends. Each of these titles are fully illustrated from artist Randall Hampton and are about 25 pages long.

THE SCIENCE BEHIND THE WRITING

The fictional characters in childhood stories are some of our earliest teachers. We learn a range of things through the observation of these symbolic models, such as what is right and wrong, a desirable and undesirable behavior, gender roles, norms, stereotypes, and more. The role of models is particularly influential in childhood as it can have a long lasting impact on development.

Each story in this collection was developed to not only be entertaining but educational as well, with the stories' characters modeling a range of age-appropriate skills spanning four areas of human development: intellectual, social, emotional, and moral. The skills that are modeled within any particular story are displayed on the back cover of each book and explained in more detail on the last page of the book.

Tales from Cloud Canyon changes the narrative by reflecting and celebrating the beautiful and diverse reality of our world. The characters within the Cloud Canyon Universe were developed to represent a range of shapes, sizes, abilities and disabilities, and traditional and non-traditional families.

In the Cloud Canyon universe:

It was also equally important that these details were not the central theme of the stories themselves as our shape, level of ability, and what our family unit looks like are just some of the many parts of who we are and not necessarily the defining feature of our stories.

All of the stories have been written and are currently being brought to life through the illustrative magic of Randall Hampton. The physical production of the books is expected to start in June 2022. Time from production to shipping is about 6 - 8 weeks (+/- 2-4 additional weeks due to COVID delays). Once Rachel receives the books, they will be shipped to backers. There is an expected arrival date of the books no later than November 2022.

The Secret to Success tells the story of Quinn and Yanni. Quinn is a quick study. but learns on a school ski trip that everything may not come as easily. This story highlights the importance of persisting through frustration and failure and the power of friendly encouragement.

For the rest of the day, Quinn kept trying,
And found each attempt more gratifying.
Through determination and her sheer will,
Quinn finally mastered the bunny hill.

Yanni’s feet still weren’t fully complying,
Staying upright, but they kept on trying.
And with each try, they did in fact progress,
And by the end, they started falling less.

Quinn never made it up the big hill with her friends,
But realized that it didn’t matter in the end.
Instead, she focused on doing her best that day,
Letting her preset expectations fade away.

While her classmates all talked about the big ski lift,
Quinn focused on Yanni’s words and her new mind shift:
The true secret to success is power of will,
Which is often much stronger than actual skill. 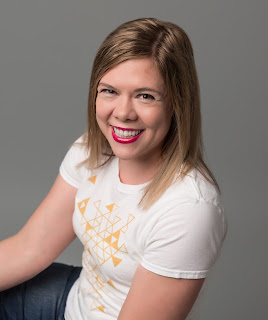 Dr. Rachel Kowert is a research psychologist, award-winning author and mom of three. In 2019, she launched her first Kickstarter project from the Cloud Canyon universe was a collection of female centered stories entitled Pragmatic Princess: 26 stories of self sufficiency and raised more than $25,000 in 30 days and won an INDIES award for educational children's picture book.

Randall Hampton is an author, illustrator, husband and father of 3. He is the Creator of "The Little Game Master" series of books and considers himself a story teller above all else. When he is not spending time with family and friends, Randall enjoys reading, video games, music, and table top games of all sorts.