Just a Girl in the Whirl by Annie Wood

This post is part of a virtual book tour organized by Goddess Fish Promotions. Annie Wood will be awarding a $40 Amazon or Barnes and Noble GC to a randomly drawn winner via rafflecopter during the tour. Click on the tour banner to see the other stops on the tour.

It kind of just happened naturally. I wrote two other books, rom coms, Dandy Day and A Quantum Love Adventure and it turned out that a lot of my readers were teens and young adults. I’m also a screenwriter and playwright who often writes coming-of-age stories, which is exactly what young adult and new adult is in the book world. It just feels natural to me. I started writing book versions of my screenplays.

And even though, I am officially very much a full fledge adult, the way I think now, about myself and the world, hasn’t changed much from when I was a kid and a teenager.

I recently read in the book “The Power of Neurodiversity,” about the concept of neoteny, which is Latin for “holding youth.” It’s when you retain childlike quality into your later life. I have that. I definitely have that. So did my mom. Hey, maybe it runs in the family. I know that “childlike” can be taken in a negative way but I see it as a positive way of holding on to the newness, always asking questions, staying open and appreciating the wonder around you.

Lauren has stacks and stacks of journals full of her poetry and loose leaf papers that she scribbled her ideas on. She has a purple pencil case full of her favorite pens and pencils, each one carefully chosen for their smoothness and darkness. There’s three books of poetry by e.e. cummings and a copy of Virginia Woolf’s A Room of One’s Own and on the inside door is an enamel sticker of a vintage typewriter with the words, Just Write It Out! There’s a Dora the Explorer key chain that her baby sister gave her for good luck and a photo of the whole family having a picnic in their backyard back when they were all together and happy.

An actor. Always. The story goes, when I was three years old I put my hands on the TV and announced, “I’m going to be on the TV!” Or maybe i said “in” the TV. I can’t remember. But I’ve just always known that being part of storytelling is where it was at for me. A writer is something I’ve always been. My dad is a playwright. I wrote my first short story when I was around 7 years old. It was about a Leprechaun and a pot of gold. And I still can’t spell leprechaun. Spell check can though. I’m still an actor as well as a writer and a visual artist. I just want to tell stories in all the ways that I can.

I was the host of a dating show in the 90s (BZZZ!) so I think I’d like to host another dating show. I love love.

Soooooo many! I love TV! Okay, here’s what pops into mind, Mork & Mindy, Laverne & Shirley, Fantasy Island, Schoolhouse Rock and Free to be You and Me. I realize most of your readers haven’t heard of these, that’s okay. They live on! I recommend if you’re going to YouTube any of them that it’s Free to be You and Me. I was a tiny toddler when it first aired but then watched when it reran. I feel like it helped shape who I am. 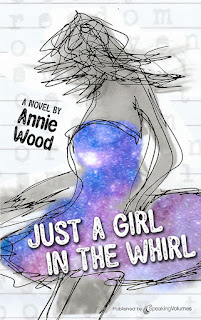 A 17 year old girl is overwhelmed with responsibilities trying to keep her messy family together. Everything spins out of control when her addict actor dad who bailed on the family three years ago leaving her with her lovable but bi-polar mom and her two little sisters, comes back into town and wants to reconnect.

Writing poems is her only escape. Just a girl in the is about family, forgiveness, and having enough courage to live your own life, your own way.

“I never know what to say to her.” Matty complains.

“You don’t need to say anything. Just your presence is enough.”

I put Sara’s old baby monitor in Mom’s room so I can hear Matty enter. I imagine Mom is watching TV with it turned off again.

“This is my favorite part.” Mom says.

Matty doesn’t say anything. She’s probably just staring at her. Matty often just stares at her.

“Tell me something I don’t know,” Mom says.

After a moment, Matty says, “Did you know that Americans watch two hundred and fifty billion hours of television a year?”

I can hear Mom applauding and then saying softly, “I love you so much, Matty.”

Matty says nothing in response. I could almost hear her heart break into a million little pieces, then I heard footsteps, and then the door closing. Matty comes zooming down the stairs. She pauses and looks out the front window. “Grandma Gayle is here.”

Grandma Gayle is Dad’s mom and when she knocks on the door, it means one thing and one thing only: it’s payday.

I open the door. She stands there, studying me. I know I look like a mess with my wild, unbrushed hair and olive oil stained t-shirt. I’m the polar opposite of this woman who stands before me. Gayle is tall, super thin, and doesn’t look like anybody’s grandma. Not at all. She speaks abruptly, using as few words as possible so she can get to the point quickly. I’m pretty sure she uses less words than the most mortals. 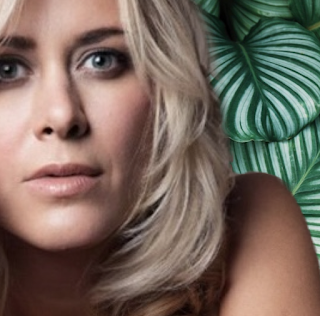 Annie Wood is an Israeli-American, Hollywood native, and a lifelong actress and writer. The web series she created, wrote and stars in, Karma’s a Bitch, was Best of the Web on Virgin America. http://anniewood.com/Karma)

Wood was part of the NBC DIVERSITY SHOWCASE with her comedic scene, That’s How They Get You. She’s written 100s of scenes for actors that have been used by Emmy Award-winning TV director, Mary Lou Belli in her UCLA course and casting director, Jeremey Gordon in workshops all around town.

As an author, she has three books out: Dandy Day, Just a Theory: a quantum love adventure and her first YA novel, Just a Girl in the Whirl (Speaking Volumes Publishing)

Annie’s also an Internationally exhibited mixed-media artist, a produced playwright, and was the third female solo dating game show host in the history of television with the nationally syndicated show, BZZZ! that she also co-produced. (Which just re-ran in 2020 on BUZZRTV!)