This post is part of a virtual book tour organized by Goddess Fish Promotions. Paula Louise Salvador will be awarding $15 Amazon or B/N GC to a randomly drawn winner via rafflecopter during the tour. Click on the tour banner to see the other stops on the tour.

I love stories for that great age group of kids who are around 8 to 12 years old. The books have to be good, because kids will just walk away if they’re not. And when children’s fiction is great, the shine in the eyes of young readers is proof of their absolute rapture with the storyline. At home, when our children were young, we always read to them. In fact, I was reading “The Lion, The Witch and The Wardrobe” by C.S.Lewis to our daughter when I went into labour for her soon-to-arrive brother. I never did finish the book with her, and she takes great pleasure in reminding me that she’s still waiting to find out what happens at the end. She’s a mother herself now, so I’ve since read lots of books to her daughter. In fact, corrections and suggestions from our granddaughter regarding early versions of my Trygg manuscript were valuable and appreciated. (There’s no critic more direct and blunt than a grandchild, and I appreciate her contributions every day.)

Okay, let’s pretend that Trygg the little Troödon meat-eating dinosaur went to “school”. He had to learn how to hunt, but nobody was around to teach him. So I think that his “locker” was a lakeshore, full of clams and frogs for snacking. His locker neighbour was a small mammal, an Alphadon that sort of looked like today’s opossums. He might have tried once to “stuff her in his locker”, as a joke, or as a way to keep her there until he could come back to eat her. Except it didn’t work. When the “school halls” were empty, he grabbed the Alphadon and brought her up to his mouth. But she played dead, with her “mouth rigid in a stiff grin.”

“Hey!” the little Troödon growled. “You laughin’ at me, fur ball?”

That was embarrassing enough, but then he felt whiskers wiggling right in his face. That was it for the young Troödon. He released the Alphadon. Then he closed his “locker” and went to search for “any snails he could gulp down without having to think about it.” (Sort of like going for an ice cream.)

I love baking rhubarb crisp. You take something sour and tough that the neighbors are giving away because they have grown too much in their gardens. Then you add lots of brown sugar and lemon juice and an oat-flake topping (with more sugar and some butter.) Bake it in the oven (don’t rush) and voilà, from sour-to-sweet and irresistible. Sort of like writing a kids’ fiction novel.

NO FIXED ADDRESS by Susin Nielsen

This is an enthralling middle-grade novel that tackles a difficult subject when “twelve-and-three-quarter-year-old” Felix and his mother are one step away from being homeless. But then they end up living in van in a park in Vancouver, B.C. To his friends at school, Felix pretends that all is fine until it becomes hard to get cleaned up, and harder to find enough food. I know Vancouver, and I know the park, and I have seen the homeless people there. I can’t wait to see how Susin Nielsen ends her story.

I actually have already met all of my characters. Well, to be honest, I’ve met their skeletons, but for dinosaurs that’s saying a lot! Horatio the Hypacrosaur is a four-footed plant-eater. And he’s big (29 feet or 9 metres long). If I ever got into trouble, I’d like Horatio to come to my rescue. As long as he didn’t step on me.

If you’d like to see that I’m not making all this up, check out our website where we’ve posted photos of the actual skeletons of the real dinosaurs that we filmed during the production of our science documentary, DINOSAUR BABIES: THE NORTH AMERICAN STORY. The video is available for download here: https://www.amazon.com/DINOSAUR-BABIES-North-American-Story/dp/B0041TX8WS/ref=sr_1_1 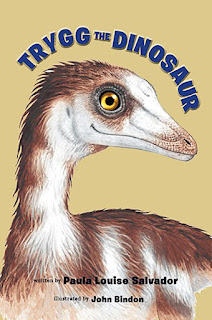 Two young dinosaurs from opposite sides of the floodplain bump into each other by chance. He’s a small meat-eater, and she’s a big plant-eater. They’ve got no parents, no food, no friends. They’re supposed to be enemies, but they decide to stick together instead. It’s not easy. When she gets caught with him, she ends up banished from her herd. He faces a huge rival who could stomp him out with one back foot. They have to outsmart a gang of bullies with sharp teeth and long, curved claws. And they struggle to survive the natural disasters of drought, mudslides and a bubbling tar pit. Worst of all, when they lose contact with each other, they fear betrayal. What if their friendship has been broken?

On the other side of the lake, the surrounding cliff quivered. A chunk of dark grey earth slid off the slope and gushed through the water. Barely ahead of the mud, another Troödon was running, kicking water into the air. He jumped onto the sand just before the sludge buried the shore behind him. The animal lurched forward then pulled up short. He was huge, bigger than the whole nest.

The little Troödon stretched both arms out. “Take me with you!”

The big Troödon leaned over, but instead of lifting him up, he placed a long clawed finger on his small head and pushed him roughly down, right on top of the closest egg.

“Hey!” the little dinosaur sputtered from the mess of smashed shell and sticky yolk. “That’s no way to help a friend.”

The big Troödon fixed his fierce yellow eyes on him, quickly sizing him up. “I got no time for friends,” he yelled as he sprinted off the island. His deep voice carried back over the water. “You’re on your own, runt.”

The little Troödon knew that he had to save himself. A mass of clay, stones and broken sticks was rising fast around him. He planted one foot in the base of his nest, then he hooked the strongest toe claw of his other foot into the rim. He pushed off and jumped out just before the mud surged over the edge and buried all the other eggs. 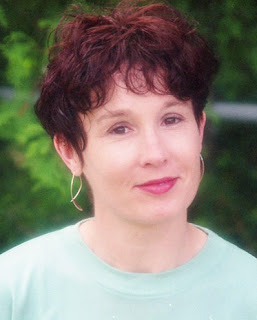 Paula Louise Salvador has had great adventures as a documentary film maker and writer. The scariest was when she stood under the ribs of a Tyrannosaurus rex skeleton – in the dark! The most fun was filming dinosaur dig-sites from a helicopter. On the dangerous side, she had to dodge alligators in Mississippi – and keep all fingers and toes out of the water.

In “BUILD GREEN” for the Canadian Broadcasting Corporation’s “THE NATURE OF THINGS”, Paula and Dr. David Suzuki visited rock star Randy Bachman’s super sustainable house. (He played his guitar for us.)

Finally, it was a tiny dinosaur that captured Paula’s heart. For her documentary “DINOSAUR BABIES The North American Story”, Paula held the fossilized egg of a little Troödon. He was curled up inside, just about to hatch. (His leg bones looked like a chicken’s.) That’s where Paula’s story of Trygg begins.

Paula has a Masters in French Literature from l’Université de Provence, France and a Bachelor of Arts (including Children’s Literature) from McGill University, Canada.