This post is part of a virtual book tour organized by Goddess Fish Promotions. Jared Agard will be awarding a $20 Amazon/BN GC to a randomly drawn winner via rafflecopter during the tour. Click on the tour banner to see the other stops on the tour. 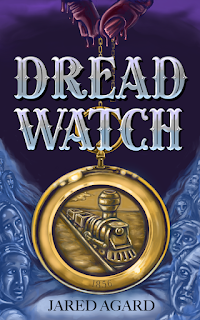 An antique pocket watch with a tragic past.

When 8th grader Caleb Meyer stumbles upon the old watch at an abandoned railroad museum, he's sure that if he has it, all his fears will vanish.

But the watch is more than just spindles and gears. A twisted ghost lives within, a Dreadmonger, feeding off the fears of his victims.

And Caleb, seeking to finally be rid of his secret, is walking right into the Dreadmonger's trap.

*** Note: This book has a fun companion Reading/Literature Course especially for those who homeschool.

I was putting the pieces together. “So, you believe that the railroad museum is haunted by the ghosts of the people in the train accident? Do you think they killed that Bradford kid?”

Austin smiled. “I’m not sure what I think. All I know is there’s a dark feeling in there. Especially in that one room. Especially around that chest.”

“Hi Caleb.” I jumped. Lilly had walked up behind me and I hadn’t even noticed.

“Oh, uh… hi.” I could barely string words together. She was talking to me.

“I want to show you something.” She held out her hand. A diamond earring sat in her palm, its facets sparkling in light cast from the cafeteria’s windows.

“What’s wrong with this?” she demanded.

My brain was on lockdown, my pulse pounding in my head. She stood there, only a foot or two away from me, her hand on her hip, waiting for an answer. I’d always hoped she’d talk to me. Now she was and I was totally blowing it. I blurted the only thing my brain would give me.

Her lips cinched together. “It is very pretty. But, there’s only one. There are supposed to be two, Caleb.”

“Oh yeah. Two. That’s right.” What in the world was she talking about? I glanced back at Austin and Hillary for help. Their faces were red, on the verge of exploding with laughter.

“Do you know the last time I saw the other one?” Lilly demanded.

I tried to force myself to look at her, but failed and ended up staring at my apple. “Uh, no.”

“It was in my ear when I went into the museum last night, but it wasn’t when I came out.”

Oh. She lost it in the museum. She was blaming me.

“You didn’t scare me that much, Caleb. Your little ghost trick was a shock at first, but only someone really gullible would’ve been scared of it for more than two seconds.”

“Blake was scared of it for more than two seconds,” I said. Lilly slipped a quick smile, but then she reverted to being mad at me again.

I glanced over her shoulder and found Blake, glaring at me from across the cafeteria, angrily stuffing his mouth full of cafeteria creamed-corn.

“To be honest, I didn’t even want to go to that museum in the first place. You guys both owe me.” Now she was staring Austin down.

“What about Blake? He was the one who convinced you.” Austin rubbed his chin.

“True. But I don’t want Blake coming with us tonight.”

“What’re you talking about?” Austin asked.

“I need to find my earring. It probably fell off when Caleb scared us, so we’re all going back to the museum tonight so you both can help me find it.” 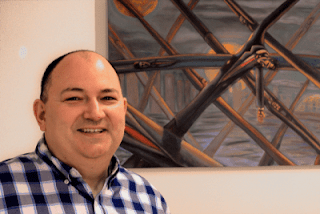 Jared Agard was writing and illustrating books as far back as he can remember. His mother was a school librarian and knew all the best books to read. Now, he teaches Art and Film at the Beaverton Academy of Science and Engineering in Beaverton, Oregon, which is his dream job, besides being an author. He values creativity and always has a new idea rattling around in his brain. He loves watching cartoons, goofing off with his boys, and chili dogs. He is married to the most gorgeous woman on the planet and has three amazing boys, two tiger oscars, and the most pathetic dog you’ve ever seen.