This post is part of a virtual book tour organized by Goddess Fish Promotions. Jonathan Pongratz will be awarding a 15 Amazon or B/N GC to a randomly drawn winner via rafflecopter during the tour. Click on the tour banner to see the other stops on the tour. 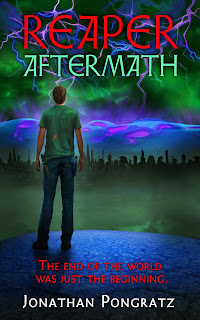 Five years have passed since the Reapers invaded Earth and tore it asunder. Gregory, his mother, Trent, and their group of scavengers hunt the decimated wastelands for survival.

But when a sudden Reaper attack forces Gregory through a Reaper door, he finds himself in a bizarre place, one that may provide answers to the Reapers’ past and where they came from.

Can Gregory put together the pieces of the past and find his way home, or will he just become another human casualty in the lost war against the Reapers?

A sudden noise woke me from my fitful sleep. I groaned and rolled over, squinting in the dark as I eyed Trent’s bed. He was fast asleep, snoring lightly. I sat up slowly, removing my covers.

I glanced at the doorway, flinching when I saw the outline of a dark figure standing there. I couldn’t make out much in the dim light from the hall, except that the person was short and had a feminine form.

I snatched my flashlight off the small end table next to my bed and shined it forward. My jaw dropped. My little sister stood before me. Her curly brown hair fell down in little ringlets, and she had an impish grin on her face.

She giggled, then ran off into the hall to the right.

“Imogen!” I cried. I couldn’t believe it. My little sister was back! I had to tell Mom, but first I had to get Imogen to stop running and tell me what happened, where she’d been all these years.

I scrambled out of bed and left my room, aiming my light down the hall. I caught a brief glimpse of Imogen before she turned a familiar corner to the right.

Why would she head to the library? We didn’t have time for games like this. I barrelled down the hall, my bare feet loud as they slapped against the tiled floor. Seconds later, I arrived at the small double doors of the school library. One of them was slightly ajar.

I entered the library with slow, cautious steps. The entrance was the only way out, but I didn’t want to spook my little sister. She must be so scared, confused to be back with everything so different.

A tall aisle of bookshelves stood before me, another opposing set on the other side of the room.

I heard movement up ahead and crept closer.

When I reached the open center of the room I spotted Imogen several yards ahead, her back facing me. She stood before a large, rickety door that wasn’t supposed to be there. My stomach dropped. A Reaper door. She reached for the doorknob.

She ignored me, and as she opened the door a brilliant white light beamed through. I shielded my eyes with my arm. “Imogen!”

My little sister walked through the door. Without thinking I chased after her. I couldn’t lose her again. As I ran through the doorway, the blinding light suddenly snuffed out, replaced by darkness. I scanned my surroundings with my flashlight, a cold tingle shooting through me like icicles.

To my right a set of stairs led upwards. On my left, numerous items of furniture were draped in white sheets. Dozens of boxes stood in tidy columns behind them. This was … no, it couldn’t be. The basement from my old house in my hometown. But how was this even possible? We knew that the doors the Reapers used had to be some kind of portal, but this didn’t make any sense.

I shook my head. Find Immy first, ask questions later. I glanced at the stairs and ruled them out immediately. I’d been right behind her. If she’d climbed the stairs I would’ve seen her. I turned left. The covered furniture and other sheeted items created odd, threatening shapes in the dark. When I ran my light over them, a wave of dread shot through my core.

I needed to get out of here and fast. I frantically checked around each blanketed surface, calling for my sister as I progressed further into the basement. I made my way to the back where Immy had been taken five years ago, my anxiety soaring. Don’t think about it, don’t think about it, I thought to myself as I searched high and low.

Regardless, faded gritty images from the past flashed inside my head: the sudden appearance of the door in the wall, me scrambling to find a weapon to fight whatever would come out, Imogen being taken by the Reaper. Her cries ...

No. No, no, no! I wasn’t going to let the past get the better of me. I shined my light around again. “Immy, where are you? Say something, please!”

I headed down the aisle of boxes along the back wall of the basement, searching every nook and cranny. I was nearly through with my search when a familiar sofa with golf clubs sticking out from under it caught my eye. The white sheet draping the couch was discolored, misshapen. I inched closer until I could snag the sheet away.

As the white cloth fell to the floor, I cried out in horror. Imogen’s dead eyes stared straight up at the ceiling. Her chest and face were covered in blood, and her expression was frozen in shock and terror. I felt around desperately for a pulse, but couldn’t find one.

Oh god, oh god, oh god. This couldn’t be happening! I had just gotten her back. Warm tears rolled down my face, and I held my little sister in my arms as tightly as I could. “Please don’t leave me,” I squeaked.

A series of guttural warbles sounded nearby, making me jump. Goosebumps raised all over my body, and the air in the basement became heavy, electric. Reapers.

I released Imogen for a moment, taking a cautious look around. I couldn’t see them, but they could be anywhere. I reached for my gun, but grabbed at empty air. Shit! It was still in the storeroom back home. I mulled my situation over for a quick second. I couldn’t just sit here and let them find me. I scooped up Imogen’s body with a grunt and made my way back. I wouldn’t leave her here. She deserved better than that.

I tottered back to the open Reaper door as best I could, stumbling several times due to the awkward load in my arms. When I was just feet away, an inhuman shriek of protest stopped me dead in my tracks. I spun around. Three Reapers approached me from the way I’d just come. A cloaked Reaper, flanked by two others on all fours. The cloaked Reaper pointed a crooked finger in my direction, and the two hunter Reapers prowled forward. Saliva oozed from their mouths and their predatory yellow eyes leered at me dangerously.

I turned back around to escape, but the door was no longer there. With one hand I struck the wall in disbelief. No, it had just been here! The Reapers on all fours closed in on me, forcing me back against the wall.

“No,” I whimpered. I couldn’t believe it. This was it. This was the end. I looked down at Imogen’s still body, propping her up to me. I kissed her forehead, my vision watery with tears. “I love you, Immy.”

I glowered at the Reapers defiantly, just in time for them to pounce upon me. 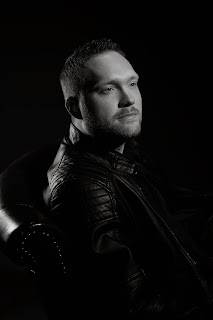 Jonathan Pongratz is a writer and author of captivating horror, fantasy, and other speculative fiction stories. When he’s not writing, he’s busy being a bookworm, video game junkie, and karaoke vocalist. A former resident of Dallas, he currently resides in Kansas City with his Halloween cat Ajax. By day he works magic in finance, by night he creates dark and mesmerizing worlds.