A Curse of Mayhem by Sunayna Prasad


Why I Chose to Write Fantasy


I have always enjoyed fantasy more than most other genres. I read the entire "Harry Potter" series in my early teens. In fact, at that time, it was the only thing I would read for pleasure.

I have always been attracted to magic, fantastical elements, and supernatural ideas, for as long as I can remember. I am a highly imaginative person who likes to create and brainstorm.

The idea of my book's main character dates back to when I was in elementary school. Then she returned to my mind in my adolescence and I developed everything about her from there.

One thing about fantasy is that you can have more freedom with your stories since there is worldbuilding involved as well as other enchanted elements. Of course, the literary devices should still be believable and make sense.

When I first published the sequel of my "Magical Missions" series in 2016 as "Wizardry Goes Wild," there were still a lot of flaws, including with credibility. One struggle involved having my characters react to magic in a believable way.

After pulling the original edition from the market and fixing the issues, I decided on a change. Instead of trying to get the characters to react to extreme situations more credibly, since I still had trouble with it, I made certain situations milder, as long as they didn't need to be severe. For example, there is a scene with a magical robotic bee. But that was originally a fake shark that functioned like a real one.

Basically, I just love fantasy and being very creative, which is why I like to write in that genre. I probably wouldn't try horror or science-fiction, though. Horror scares me and science involves more research as well as math. Yet, with fantasy, I have more freedom along with fun. 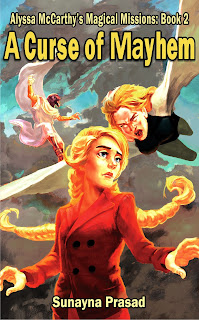 History, like magic, has a habit of repeating itself

It’s been six months since thirteen-year-old Alyssa McCarthy left magic behind for good. Or so she thought…

Then the enchanted objects that protected her disappear. Now a skeleton named Errol has cursed her with magical powers that keep getting her in trouble. Suddenly strange things are happening with disastrous effects, and if Alyssa can’t remove the magic, she will lose everything she holds dear.

In order to get rid of her unwanted wizardry, Alyssa will have to boost her bravery and confidence and determine who Errol really is. But every time Alyssa uses an enchantment, Errol is one step closer to getting his flesh back and becoming alive, and he will do anything to achieve his goals…even if it means destroying Alyssa’s happiness.

Originally published in 2016 as “Wizardry Goes Wild” and “The Unruly Curse” in 2019, “A Curse of Mayhem” is book two in the exciting and suspenseful “Magical Missions” series.

Lilac-colored smoke poured in through the slight opening under Alyssa’s bedroom window. Alyssa leaped back. She swore the window had been closed when she’d come in here a few minutes ago.

The gas clouded into her room, blocking her sight. It washed onto her, causing her to squint and lean back. She coughed, rubbed her eyes, and opened them. The smoke faded. Someone must’ve pulled a prank, and not just any kind—one that involved…wizardry.

Alyssa’s breathing sped up. She shut the window and gazed at the huge yard and long driveway. No one was outside—not even Alex, her godfather and legal guardian.

Perhaps the trespasser had escaped or had hidden somewhere—maybe behind the tree on the lawn or somewhere else on the property.

Alyssa hurried out, brushing ash from her muted purple shirt. She entered the ground floor and opened the front door. “Hello?!”

There was no answer.

“Whoever set that smoke off, it wasn’t funny!”

Despite the freezing air this autumn evening, Alyssa stepped onto the front porch. A piece of paper appeared out of nowhere, making her jump. She picked it up, anyway.

Welcome back to magic.

Her chest tightened. She hadn’t encountered a single instance of wizardry in six months! Plus, she had two objects that were supposed to protect her from such encounters.

She dashed back up to her room and opened the closet door. Tape hung from a shoebox, and the items that she had left in there…were missing.

About the Author: Sunayna Prasad enjoys writing fantasy books for children, as well as cooking, creating artwork, watching online videos, and blogging. She has also written The Frights of Fiji, formerly titled as From Frights to Flaws. She is passionate about modern life, fantasy, and world-building. Aside from her website, she also has a blog about different creative and entertaining topics, including fiction and writing, called “Sunayna Prasad’s Blog”.