This post is part of a virtual book tour organized by Goddess Fish Promotions. Rob Currie will be awarding a $10 Amazon/BN GC to a randomly drawn winner via rafflecopter during the tour. Click on the tour banner to see the other stops on the tour.

I got hooked on kids’ books from reading to my boys. One of my sons had trouble reading on his own but loved being read to. I soon discovered there are many wonderful books for kids. My sons are grown but I still read kids’ books because I enjoy them. Loving these books so much, it seems natural to write for a young audience.

That’s easy. After dealing with Nazis chasing him, Dirk would have a big mirror in his locker so he would see anyone trying to sneak up on him. He’d also have a lot of food. After being nearly starved for weeks during the Dutch Hunger Winter of World War II, he’d stock up so he’d never have to worry about going hungry again.

Two of my favorite books were Robin Hood and Robinson Crusoe. I discovered them as a child on the shelf outside my bedroom. We weren’t allowed to come downstairs on Saturday morning before 8 a.m., in order for our parents to sleep in. If we woke up before that, we could grab a book and read.

It’s salty treats not the sweets that get me. My wife and I have a wonderful relationship based on three things—commitment to each other, our faith, and keeping plenty of chips in the house.

I’m reading Christy by Catherine Marshall. A book about a woman who volunteers to teach in Appalachia in the early 20th century. It’s not the type of book I usually read but authors need to read a wide variety of books and genres. Otherwise, each book they write can sound too much like the previous one.

Neither. I love Suzanne Collins’ series, Gregor the Overlander¸ which she wrote just before Hunger Games. I love the action and the protective personality Gregor has watching over his little sister, Boots, as they search for their father. That story influenced on Hunger Winter. My story also features an older brother who protects his younger sister while they search for their father. You can’t go wrong in a kids’ story when you capitalize on the natural yearning that kids and their parents have for each other.

You’re stranded on a desert island—which characters from your book do you want with you? Why?

I want Hans Ingelse, a resourceful WWII Resistance operative. He stays calm under pressure and is a good problem solver in tough situations. I want him there for his wisdom and street smarts. I also want Els, his eighteen-year-old daughter, who through enduring Gestapo torture without spilling secrets, showed she’s probably the toughest member of the family. I want her there for her courage and determination. 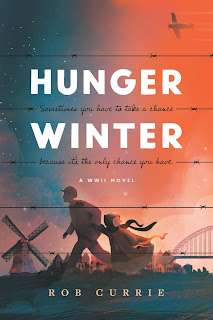 It's the Netherlands in late 1944. Thirteen-year-old Dirk's Papa left to fight with the Resistance. Then Mama died. When the Gestapo snatched his older sister and he learned they were coming for him next, Dirk left home in the middle of the night. He had his pockets stuffed with food, his little sister asleep in his arms, and his heart heavy with a dark secret.

At 1:45 a.m. Otto Adler rose from his recliner, walked to a table, and picked up a sheet of paper. He scanned it and set it on the table. “Johann went to kill Ingelse but didn’t come back,” he said to the empty room. He pounded the wall with his fist. “I bet the Dutchman outsmarted him and suckered him into talking. I told Johann not to talk! Just shoot him! But he never listens to his older brother,” he growled. “I won’t make that mistake.”

He made a phone call.

“So we get it done. Ingelse is a snake that slithers away. But not this time. Ten minutes to get there. We watch the house for fifteen minutes.”

He drummed his fingers on the phone table.

“At 2:45 we walk up to the house. I stand on the porch, and you crouch in the bushes with your gun.” He shaped his free hand like a pistol.

“I knock on the door and say, ‘It’s Windmill.’” He smiled. “I tell him I have an important delivery. When he looks at me, you jump on the porch. You shoot. We leave.”

He was silent for thirty seconds. “Yes, I’m sure. That Jew-loving Ingelse will be dead in an hour.” He hung up the phone and fed his notes to the flames in the potbellied stove.

About the Author: Life conspired to get Rob Currie to write Hunger Winter: A World War II Novel. His father is a World War II veteran and his wife is Dutch. An award-winning author, it was only a matter of time before he would focus his writing on World War II. Research for Hunger Winter included numerous books, interviews with Dutch WWII survivors, and three weeks in the Netherlands. His investigation revealed astonishing details about the Dutch experience of the war, which begged to be turned into a book.

Born and raised in the suburbs of Detroit, he graduated from Cornerstone University and went on to earn a master's degree and doctorate in psychology from St. Louis University. He has taught psychology at Judson University since 1987. His hobbies include playing basketball, cooking, and writing poetry.

a Rafflecopter giveaway
Posted by Books in the Hall at 5:25 AM