Review: Escape from the Past: The Duke's Wrath by Annette Oppenlander

This post is part of a virtual book tour organized by Goddess Fish Promotions. Annette Oppenlander will be awarding a $20 Amazon/BN GC to a randomly drawn winner via rafflecopter during the tour. Click on the tour banner to see the other stops on the tour. 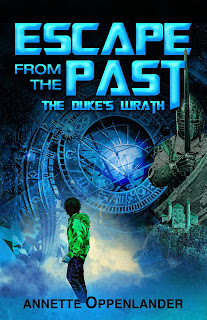 "...an entertaining and fast-paced read that guarantees to thrill any young reader's/gamer's wish to be a hero in faraway time." -Historical Novel Society

When nerd and gamer, Max Anderson, is lured into trying an experimental computer game, he doesn’t realize he's playing the ultimate history game, time-traveling into the past...anywhere...anytime. Survival is optional. To return home he must decipher the game's rules and complete its missions--if he lives long enough. Tofail means staying in the past--forever.

Now he’s trapped in medieval Germany, unprepared and clueless. It is the year 1471 and he quickly learns that being an outcast may cost him his head. Especially after rescuing a beautiful peasant girl from a deadly infection and thus provoking sinister wannabe Duke Ott. Overnight he is dragged into a hornets' nest of feuding lords who will stop at nothing to bring down the conjuring stranger in their midst

Enjoy a rollicking lesson in history? Then you should try Escape from the Past: The Duke's Wrath. From the start I was hooked on this story. Max keeps remarkably calm for a young boy thrust several hundred years in the past. I'm not sure I would be able to do the same. Of course, at first he's thinking it's still all just a video game, but eventually he realizes the error of his assumption... largely based, I think, on the smell of 1471! The stench and the horrible food (at least that "enjoyed" by the lower classes) were vividly described and incredibly off-putting (as they should have been). While I'm certainly no history buff, I have read extensively in the genre and it seemed quite accurately described, without much of the glamour many other historical books seem to use to make the past appear a lot more romantic than it actually was.

Max is clever, sneaky and so very brave. He does things several times that horrify his new friend from the time, Bero, but those are the very things that lead to his advancement in the time. At first, he just wants to get home, but eventually he resigns himself to living there and begins to make a very solid life for himself. It was quite interesting to watch the change in him, as well as in Bero and Bero's family.

I know we have to take an incredible leap of belief to honestly think a video game could be a time machine... but, heck, who'd have thought a DeLorean could be one? I had to suspend my belief other times, as well, because Max was very mature in ways most kids today are not. But without that ability, he likely would have been dead on the fifth page and then where would we be?

I really did enjoy this story. While certainly written for a youthful audience, I don't know why adults couldn't enjoy it as well. I did, and I'm many years out of my first decade. I'm absolutely looking forward to seeing more from this author, and from Max! Now that he knows what he's actually dealing with, things should get interesting...

The guard ignored me and stared over my shoulder. I thought of my comment to Bero on how to speak up to the Lord. It had been easy to say. Bero would laugh at me now.

“What seems to be the matter?” a voice called from behind.

“My Lord.” The guard bowed his head. “We caught a suspicious intruder, a probable spy. We await your orders.”

“He came from yonder.” The second guard, who’d returned with a huge sour-looking youth, pointed in the general direction of Bornhagen.

“Then there is no better time than now, say I. Turn him ‘round.”

The guard shoved me to face the group. Not ten feet away towered one of the largest horses I’d ever seen. Its humungous head swung back and forth as if it were proud of the armored breast and nose shields. On top soared Knight Werner whose piercing blue eyes searched my face. For a moment, the world retracted into stillness. I felt my knees wobble.

Any second now they’d cut off my head. Hadn’t Bero said the Lord would kill me? Yet, the Lord of Hanstein neither showed anger, surprise nor fear. Nobody spoke as I stood pinned between the guards, their hands iron cuffs on my arms. I smelled them, their unwashed bodies and filthy hands. I wanted to leave the game. Return to the safety of my former life. Now! All I could do was suck air. My room might as well have been on the moon. Werner’s men waited, probably ready to charge on command.

“Your name is Nerds,” Werner finally said. The blue eyes were unsettling. 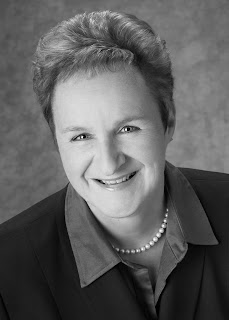 Annette Oppenlander is an award-winning writer, literary coach and educator. As a bestselling historical novelist, Oppenlander is known for her authentic characters and stories based on true events, coming alive in well-researched settings. Having lived in Germany the first half of her life and the second half in various parts in the U.S., Oppenlander inspires readers by illuminating story questions as relevant today as they were in the past.

Oppenlander’s bestselling true WWII story, Surviving the Fatherland, won multiple awards, including the 2017 U.S. National Indie Excellence Award. Her historical time-travel trilogy, Escape from the Past, takes readers to the German Middle Ages and the Wild West. Uniquely, Oppenlander weaves actual historical figures and events into her plots, giving readers a flavor of true history while enjoying a good story. Oppenlander shares her knowledge through writing workshops at colleges, libraries, festivals and schools. She also offers vivid presentations and author visits. The mother of fraternal twins and a son, she recently returned to her home, Solingen, Germany where she lives with her husband and old mutt, Mocha.