The Blackfish Prophecy by Rachel Clark

“The Black Stallion” series in its entirety by Walter Farley because it showed the joy and power of human-animal bonds, because the writing was fast and gripping to my young mind, and because it gave me a wonderful world beyond my own to dream and engage in. I carry around two complete hardcover sets of this series now, one of which consists largely of first editions.

I always knew I was a writer, and had every intention of going to college to be an English major. Then I took a biology class and read a book about human evolution, and everything I’d known as a little girl who loved horses, flowers, camping, and being in the woods came together to pull me into studying the great story of Life on Earth. That’s how I became a biologist and writer, uniting two of my great loves.

It gets better. It’s not your fault. If they tell you it is, leave. It is always ok to take care of yourself first. You have agency and power beyond your wildest dreams. Ask the universe to show you how to move with your heart. It will always answer.

Then: Always move with your heart. Be that one - the one who elevates us by modeling love. Animals understand.

Meditate: it connects you to all that is, and to your deepest truths. Move your body, mind, and spirit every day in ways that bring you strength, growth, and joy. Eat whole locally grown clean food from healthy systems. Sugar, booze, and processed junk will shorten your precious life.

HAH, what book isn’t? Here are the ones on my “immediate pile” by the nightstand:

• Mind to Matter: The Astonishing Science of How Your Brain Creates Material Reality by Dawson Church
• The Three “Only” Things: Tapping the Power of Dreams, Coincidence & Imagination by Robert Moss
• The Feather Thief: Beauty, Obsession, and the Natural History Heist of the Century by Kirk Wallace Johnson
• Becoming by Michelle Obama
• Annihilation by Jeff Vandermeer

Carl Sagan’s Cosmos, Little House on the Prairie, and The Facts of Life.

Dinner would be around a bonfire on the beach where we all share a locally harvested meal by the sea. And four is not enough to suit my craving for deep, culturally healing discussions and plans. We have powerful restorative work ahead. My list would include: The Black & Alec Ramsey, Paikea Apirana, Won-a-pa-lei aka Karana, Moana, Sam Gribley, Fern Arable, Laura Ingalls, Minny Jackson, Scout Finch, Ishmael the Gorilla, Odysseus, Legolas & Arwen, Jacob Black, Hester Prynne, Celie and, of course, Lois Lane. 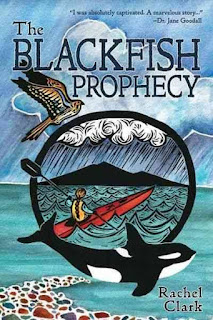 Best friends Terra and Tiluk live alongside the wild orcas of Washington State. On the other side of the continent, Miles wallows in anger and self-pity fueled by his parents' divorce. In a moment of harrowing fate, their lives converge when Miles witnesses a captive orca brutally kill his trainer at a marine amusement park.

When Miles contacts Terra and her family of whale biologists to better understand the "killer" whale, the three teens soon realize they are more linked to each other - and the whales - than they ever imagined. Driven by a primal urge to connect with the highly-evolved consciousness of the orca, the teens take extraordinary risks to challenge big business and renew lost traditions.

Their journey is set to restore an ancient mystical bond between humans and whales that ultimately reveals The Blackfish Prophecy…a revelation about Terra - and those like her - that's about to change everything.

He wasn’t sure whether the fence was supposed to keep people out of the swamp, or keep the swamp away from the people. The snakes were seriously getting out of control. You couldn’t live in Florida and not know about the yellow anacondas, Burmese pythons and boa constrictors. They were a huge problem since they’d been accidentally introduced. The snakes loved it here, and they didn’t have anybody to eat them, so they were pretty much everywhere. He’d heard rumors at school about snakes that had even eaten little kids. Sometimes he’d just come here and stare over the fence, peering from the concrete stronghold of their subdivision into the dank, vegetation choked, black‐watered quagmire. The swamp creeped him out but, at the same time, it pulled at him, beckoning somehow.

The sidewalk was much smoother than the pavement, and he rocketed past all the backyards, blipping from fence to fence at high speed. He veered into the swamp on the fenced walkway that linked the back edge of his massive development to the business district on the other side of the swamp.

There was trash everywhere in here; soda bottles, needles, plastic bags, broken glass. This pathway smelled even worse than plain old swamp; like exhaust and beer mixed with the smell of a dead body rotting in mud. He raced past a couple of sleeping old homeless guys on benches, relieved it was getting lighter outside. He never came here in the dark.

Once he hit the business district, everything clicked. I’m going to OceanLand. He hadn’t realized it until that very moment. He slowed for a fraction of a second, Seriously Frost? Umm, Duh! YES! It was only a couple of miles from their house, which was one reason their mom took them so often—she’d bought a family membership after the divorce. Broken family membership, more like. He whipped through the back parking lots of the Taco Bell, McDonald’s, Kentucky Fried Chicken, Wendy’s and Exxon. When he got to Wal‐Mart, he knew he was close. Slowing, he narrowed his eyes and scanned the OceanLand perimeter. First was the gigantic parking area, which is what people saw when they pulled in. It was so big you could plunk down a freaking small town on that lot with room to spare. Behind that was the park itself, which was enclosed by a huge 12‐foot‐tall solid wood fence that snaked back into thick vegetation. Miles’ gaze fell against the trees back there, and instinctively he pushed his board toward them. But this time his foot came down carefully, gently. He’d gone on high alert. He was pretty sure that OceanLand wouldn’t want people sneaking around back there, especially after that Harvey Mott guy managed to get himself killed. Not to mention Dusky yesterday. The hair on the back of Miles’ neck went up as he realized what he was about to do. He pressed his mouth tight in resolve. I am doing this. 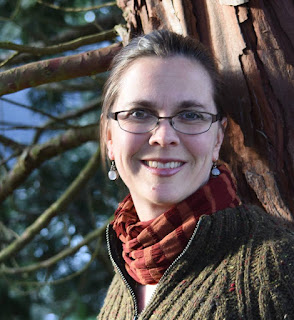 Rachel is a writer and biologist. As a kid she got hooked on all things animal, vegetable, and mineral. To complicate matters, she was hatching up stories before she could hold a crayon. Once she discovered biology it was all over. Ever since her first class in 7th grade when she refused to dissect a frog, a little voice in her head said: You gotta share this amazing stuff about how nature works, and ask if we really need to harm it. The little voice only got fiercer once she went to college and worked with captive dolphins and Beluga whales, then got to see wild killer whales only a few weeks later. From then on it was an all-out quest to convey the wonders of nature, while pointing out the serious problems of our very bad habit of dominating others and the Earth. She’s been a card-carrying science writer for twenty years. The Blackfish Prophecy is Rachel’s first book.

These days when Rachel is not writing, reading, dreaming, or speaking, you can find her sculpting an unruly assortment of moose-pruned orchard trees & berry bushes, gathering veggies & eggs in her micro-farmyard, foraging for mushrooms, and feasting on local food with friends.

She is a lifelong yogini, devoted pack mate to her free-spirited Canid, and mama bear who's sustained by treks deep into the Pacific Northwest with her increasingly feral family. Rachel drives a 100% electric zero-emission car, and her family's home is powered by renewable energy. Their little house is nestled on an urban lot they tend for kids' play, territory Animalia, sequestering carbon, and a food forest to augment the bounty of local growers.

Her work is fiercely aligned with the science of Life, harmony & justice for all: the enduring dream of Earth.