Keepers of the Stone by Andrew Anzur Clement

This post is part of a virtual book tour organized by Goddess Fish Promotions. Andrew Anzur Clement will be awarding a $10 Amazon or Barnes and Noble GC to a randomly drawn winner via rafflecopter during the tour. Click on the tour banner to see the other stops on the tour.

A blood-red sash. A dagger. And an Ax. With any of them, Malka can take down anyone who gives her the slightest milligram of crap.

Before you ask: No. None of these items are permitted by school authorities. And no. She couldn’t care less.

Lighten up at bit. You don’t have to do everything. Or be the absolute best there is at it out there. Trying to do so isn’t going to guarantee that your future is going to be perfect in every way. Take the time to poke your head up. Enjoy what’s going on around you. The expectations of others aren’t nearly as important as what you want from life. That’s really the question you need to think about answering first.

I must admit. I can’t stand most reality TV. The one exception to this is the Amazing Race. I enjoyed watching it while I still lived in the US, because of the worldwide destinations they send the contestants to. And the intercultural nature of the issues they face. Maybe it’s little wonder that I wrote three books about a group of youths who are unwittingly sent on a quest that spans the globe. Where the stakes are high. The destination unknown. And the challenges to completion hard to surmount.

The summer before I was about to enter my final year of high school, my family went on a trip to Spain, Portugal and France. But that was only the beginning. Two days after my return I shipped out again. This time to Male. The capital of Maldives. The country was in the process of democratizing. My job there was to teach the best practices of reporting in a democratic society to the journalists working for the national broadcaster, by working with them as a correspondent in the field. Before this process, the profession consisted mainly of reading the government press releases over the air; the job of journalist wasn’t that highly regarded. Most of them were my age (I was seventeen at the time). It was my first time in a Muslim country. I was a bit nervous, at first. But, I had a blast. The best few months I’ve spent in my life.

In Keepers of the Stone, you may notice that the names of most of the inhabitants in Malka’s camp aren’t Tamil. They’re Maldivian. The names of the friends and co-workers I met while there (To the ‘real’ Zaima, I’m sorry. It wasn’t intentional). It was a sort of homage to a time spent doing the news, with great friends and a unique sort of purpose. That, and to this day I can still swear fluently in Divehi. Best summer ever.

Stas. He clearly has the most advanced survival skills of any in the bunch. Before we meet him, he’s already survived – and even thrived – for months in the wilds of Africa and India. This kind of thing would totally be in his comfort zone. He’d probably even welcome the opportunity, given the ‘civilized’ world I make him face in Keepers. Stas would probably know enough to fashion a raft from driftwood, get us the hell away from the damn place and save the day again.

A really nice apartment in Poland or Slovenia. (Or both! It is a million dollars, after all. Poland can get a bit chilly in the winter). They’re two of my favorite countries in the world. I’d want someplace with a suitably nice view, from which I can put my feet up and write.

I’m the kind of person who craves silence while drafting. But, most ideas for new plot lines come to me while listening to my favorite genre of music: Opera. An entire plot line of Voyages of Fortune, the sequel trilogy I’m penning to Keepers of the Stone, was inspired by the Royal Opera of Wallonia’s stagings of Turandot (my favorite) and Nabucco. Music from those works is often somewhere in the background of my head as I’m writing.

A Pakistani girl, whose family moved from Karachi to the US. We bantered back and forth a lot, each having similar sarcastic senses of humor; I think that was how it got started. The only problem was that she came from a rather conservative Muslim family. We had to sneak around – sometimes even at school – so that none of her cousins, aunts or uncles would see us hanging out together.

Weekend Polish language school. Yes, that’s right. I volunteered my time on the weekends to learn Polish during high school, in addition to taking every AP class you could think of during the week. It was here that my teacher first introduced me to Henryk Sienkiewicz’s In Desert and Wilderness. It quickly became my favorite novel. That work now serves as the partial back story for a plot arc in Keepers of the Stone. Yes. I think it was time well spent.

Keepers of the Stone. Book One: The Outcasts

In a far corner of the British Empire, a mysterious girl gallops away on a horse, fleeing for her life. Malka has sacrificed everything to protect an all-powerful stone from falling into the hands of the malevolent Urumi. The last in a Sect of thieves, the girl is a trained killer. But will her lethal skills be enough to defeat the Shadow Warriors and their superhuman abilities?

The fate of the stone may depend on Stas, a courageous youth born into exile from a country that is not on any map. Nell, his friend since childhood, has been caught up in the Dark Order's evil designs. The young outcasts must confront demons, real and imagined, with the help of mystical new allies. Their journey will take them to distant lands and change their lives forever.

Stranded on the American frontier, Malka must stop at nothing to safeguard the all-powerful stone. She has come under the protection of a snarky felinoid – a shape-shifting girl who traces her lineage back to the court of Vlad Dracula. They must rescue with Henry, the American orphan whose thirst for knowledge could help decipher the clues to the next leg of their journey – if the Urumi don’t kill them first.

Alone in yet another strange land, Stas mourns the unthinkable loss of his friend, Nell. Cryptic messages offer new hope. But the Dark Order has devised another strategy to outwit the band of misfits. Plans are betrayed and alliances are formed as history points to the final objective of their quest.

Stas and his companions have made their way to the partitioned homeland he has never visited. He dares to hope that Nell may be alive. The doomed princess Bozhena vows revenge on the Shadow Warriors, who have enlisted Malka’s most bitter enemy in their latest plot to control the powerful stone.

With the help of a streetwise gypsy girl, the unlikely travelers must outwit the Urumi and deliver the stone to its final destination. All they have to do is put aside the differences that threaten to tear them apart. The secrets of the past hold the key to the history of the future.


Read an Excerpt from Book Three:

“Who are you?” the man asked, looking behind himself in surprise. Inside the kitchen, some of the other staff were moving to see what was going on in the lobby. That could not be allowed. The kitchen employee turned back to find himself looking down the barrel of a six-shot revolver.

“I’m the one who’s pointing a gun in your face. Let me in. Now,” Stas demanded.

The man seemed to hesitate for only a second before stepping aside, placing his frame against the open door. Holding the weapon with both hands, Stas edged forward. In front of him, he could see the kitchen. It was a rather dark space. Various dishes sat on the stone counters in different stages of preparation. Most of the staff looked at him with stares of fear and shock. When Stas used to dream of coming to his family’s home city, this was just one more way in which it had not at all been the experience he’d had in mind.

There was a sudden yowl, followed by the sound of a foot impacting with flesh and a body crumpling to the floor. Stas glanced back just long enough to see that Liza – now in her human form – had taken down a younger man, about Stas’s age, with a side kick. He had been waiting beside the doorframe, apparently intending to attack the Slav from behind with a butcher’s knife. Kneeling quickly, Liza retrieved the cutting tool, which was smeared with blood from some kind of beef or pork meat. Standing in the doorway, she raised it up to a point beside her head. The felinoid turned the blade towards herself as she inspected it briefly, before allowing the ends of her lips to curl slightly upwards, while jutting out her lower jaw. Concurrently she nodded twice, as if deciding that this would do nicely. 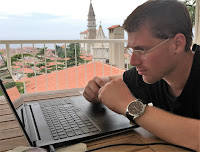 Andrew Anzur Clement departed his native Los Angeles at the age of nineteen, with a curiosity for far-off lands. He quickly discovered an insatiable wonderlust that has led him to live, work and study in many fascinating places around the globe. Now in his late-twenties the unabashed opera fan is based in Europe. He continues to travel and read widely, finding new inspiration in the places he discovers. In his ‘other’ life Andrew is an academic researcher, focusing on nationalism and identity formation. He enjoys including insights from his research in his books and the characters he inhabits.

Buy the book at Amazon, Amazon UK, iBook, Kobo, or Barnes and Noble.