The Ticket by Debra Coleman Jeter

This post is part of a virtual book tour and the author is giving away a $10 Amazon or B/N GC to a randomly drawn winner via rafflecopter during the tour. You can see the other stops on the tour (and read some more of the story) by following the stops you'll see here. 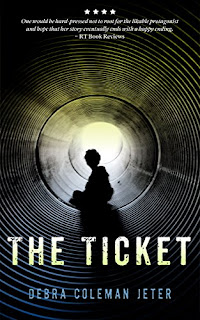 She hoped winning the lottery would solve her problems.

Her problems have just begun....

It is 1975, an ordinary year for an ordinary Southern family. TRAY DUNAWAY, like thousands of other teenagers around the country, longs to be part of the popular set at school. Tray’s mother, EVELYN, lies in bed most days with a headache, and her bipolar tendency toward extreme highs or desperate lows veers more and more often toward depression. Tray’s grandmother GINNY, who lives with the family, still grieves the loss of her husband, Brook. She believes it’s time for her to move out, if she could afford to, and find a place of her own, maybe even a new romance. This doesn’t look likely, given the state of the family’s finances.

Then something extraordinary happens. A down-and-out friend of the family, PEE WEE JOHNSON, buys an extra lottery ticket. He gives it to Tray’s dad as a thank-you for driving Pee Wee to Hazard, Illinois, where he purchased the tickets. And what do you know?

When Johnson demands his cut, Tray’s dad refuses. As Evelyn’s illness spirals toward madness, Johnson turns threatening, and Tray makes some poor decisions, what initially seems like a stroke of good fortune suddenly triggers a disturbing chain of events.

I finally locate a pretty skirt and sweater in my size on a sale rack, stuck in amongst lots of ugly stuff, that actually falls within my meager budget. The sweater is a fuzzy yellow, the skirt a yellow and baby blue plaid on a cream background. Powder blue? Could this be powder blue? I try them on and model for Lori and Julia, almost fearful of their reaction. I so want this to be the right choice.

Julia looks doubtful. “I think you look better in pleats than in that A-line,” she says. “And I’m not sure yellow is your color.”

So, I return the skirt and sweater to its rack. Later, however, before we leave the store, having found nothing else within my budget I like enough to try on, I retrieve the yellow and blue outfit and, almost furtively, carry it to the check-out register. I catch Julia’s eye on me and start to speak, to defend my choice. But, not knowing how to explain that sometimes you have to “settle,” I say nothing at all.

Julia smiles. “A girl who knows her own mind,” she says. “An altogether admirable quality.”

And just like that, I feel better. But not for long because, deep down, I know the compliment is false. The salesgirl rings up the purchase, and I pay in cash, wondering if Julia can see I’ve exhausted the funds in my pocketbook.

Behind her at the check-out counter, Julia places a large stack of selections on the counter. I gasp. “You’re buying all of those?”

Simultaneously, the salesgirl, who has thin lips and a slightly protruding chin, says, “Will that be all?”

Julia glances back toward the racks, then at me. “Why don’t you let me buy you that other outfit, the one that looked so good on you?”

I hesitate, yearning for the clothes, but unable to accept charity. “Thank you, but no,” I say. “I couldn’t possibly.”

“Are you sure? It looked so heavenly on you; it would be my pleasure.”

“I’m sure,” I say, wanting to cry. The salesgirl looks impatient, and the moment of opportunity passes.

“That’s all, then,” says Julia, and the girl rings up the purchases.

I am staggered at the total, but Julia doesn’t flinch, merely takes out her checkbook and scribbles the information into the blanks.

“Look at this!” Lori beckons to me. I leave the register, carrying the bag with my skirt and sweater in it, which feels like I’m hauling lead. Next thing I know, I’m oohing and aahing over a rack of party dresses: long gowns with sequins, some strapless, a glimmering blue-silver one with a strap over one shoulder, dresses for a ball or a prom. And I wonder if ever in my lifetime I will wear such a dress, much less design one. I finger the glimmering garment, search for the price tag, which is tucked away discreetly. I look again, count the number of digits before and after the decimal.

No way will I ever own a dress like that.

Lori glances toward the check-out register, where her mother appears to be involved in a quiet conversation with the salesgirl. “Oh, dear,” she says, “not that again. 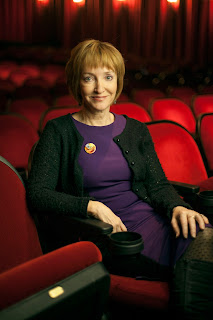 The Ticket is Debra Coleman Jeter’s first novel. It was a finalist for a Selah Award in two categories: Young Adult Fiction and First Novel. A Vanderbilt University professor, Debra Coleman Jeter has published fiction and nonfiction in popular magazines, including Working Woman, New Woman, Self, Home Life, Savvy, Christian Woman, and American Baby. Her story, “Recovery,” won first prize in a Christian Woman short story competition, and her nonfiction book “Pshaw, It’s Me Grandson”: Tales of a Young Actor was a finalist in the 2007 USA Book News Awards. She is a co-writer of the screenplay for Jess + Moss, a feature film which premiered in 2011 at the Sundance Film Festival, screened at nearly forty film festivals around the world, and captured several international awards. She lives in Clarksville, Tennessee, with her husband.