This post is part of a virtual book tour organized by Goddess Fish Promotions. Liz Keel will be awarding 2 randomly drawn commenters each a $10 Amazon or Barnes and Noble GC via rafflecopter during the tour. Click on the tour banner to see the other stops on the tour.

After losing everything, all seventeen-year-old Thea wanted was to be a normal teenager. Instead, she was attacked by a mysterious creature she thought only existed in fairy tales. Now thrown into the unknown realm of Faey, Thea is forced to determine the difference between reality and fantasy, in a world ruled by a dark elite and a society wracked by intolerance and prejudice. With the support of her new friends and a mysterious dark haired, blue-eyed guardian watching her every move, Thea will discover that when it comes to Faey, nothing is what it seems. Will her courage and desire to save this new world from darkness be enough? Or will Thea be the next victim to fall to the dark whispers of fate...

“No!” I screamed. It had happened again. This was the fourth night in a row I had woken up with a start, beads of sweat dampening my forehead and a sick feeling swirling in my stomach. Rubbing my face whilst trying to sit up I thought back to the same terrifying dream that had been haunting me for weeks now. Not that I expected it to be any other way. I mean, watching your parents die in a car crash will have that effect on you. The difference was that I was supposed to have died. I know it sounds crazy but there was no way I should have survived that; yet I had, and I was sure that the only reason I was still alive was because of the bright light that had emanated from my body.

We were supposed to have been setting off on a three-month expedition around India, but only got as far as our local town in Montana before it happened. One minute I was sitting in the back of the car fiddling with my iPod and the next second I’d heard Mom screaming. I’d looked up just in time to see a car skidding along on the road before it hit us side-on, flipping us into a ditch. Even now the fear I’d felt at the time – the fear of what was to come – still swallows me whole. Time had seemed to slow down as I had watched my mom and dad being thrown around as the car had turned upside down. Our screams had been overwhelming and I’d been reaching my breaking point, when suddenly all went silent and I had been engulfed in a bright, orange glow that had blinded me. Everything after that was hazy. I remember smacking my head on the window, which had been followed by an unbearable pain that had made my skull feel as though it would explode. I put my hand to my forehead, feeling a warm and sticky liquid trickling down the side of my face. Putting my hand out in front of me, I saw it was blood, but my fuzzy brain couldn’t comprehend what I was seeing. It was at that point black spots started to creep into my vision, making everything seem blurry.

Then, however much I tried to stay awake, the darkness won and I slipped out of consciousness. 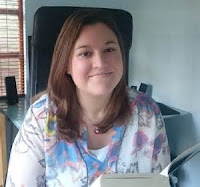 I live in Surrey, England, a short walk from the beautiful Windsor Park, with my husband Richard and our two gorgeous children Noah and Olivia. For me, writing is nothing short of an addiction and I often find myself sneaking out to my writing shed for just a few minutes, which can often turn into hours of pure, unadulterated bliss catching up with my characters and continuing their story. In-between writing, I teach in a primary school where there’s never a dull moment! I will also often be found Kindle in hand, reading a wide variety of genres but with YA fantasy and paranormal romance at the forefront of my reading list. Although I’m currently writing the second book in the Driel trilogy, other characters involving all things fantasy, paranormal and YA romance are jockeying for position, wanting me to write their story next, so watch this space! It is such a privilege to share my stories with you the reader. Thank you enough for taking the time to find out more about me. To find out more about Liz, visit her website: www.lizkeelauthor.com
TWITTER: https://twitter.com/LizKeelAuthor
FACEBOOK: https://www.facebook.com/lizkeelauthor/
INSTAGRAM: https://instagram.com/lizkeelauthor


Enlightenment will be $0.99 during the tour. Buy the book at

In addition, the publisher is giving away a Kindle, among other prizes - just click on the banner to enter: