Interview with Patricia Grasher, author of MY DOG CAN FLY

This post is part of a virtual book tour organized by Goddess Fish Promotions. Patricia Grasher will be awarding a $15 Amazon/BN GC to a randomly drawn winner via rafflecopter during the tour. Click on the tour banner to see the other stops on the tour.

I loved reading as a child and that first fascination has stayed with me. I love the young age group because they are open to almost anything. Magical, fantasy or true life the possibilities are endless.

I still read lots of books in the age group I write for simply because I enjoy them.

Definitely ice-cream. Dairy Queen’s Peanut Buster Parfait to be exact. With 710 calories it’s not something that I have very often. Not even once a year but it is yummy delicious. If I could have a second it would be a frozen yogurt chocolate swirl from Costco. And if I could have a third (I like sweets) it would be a couple of chocolate chip cookies. Did I say a couple? I always plan that way not usually how it ends up.

Does your dog fly? Maybe you don’t really know. Perhaps they turn invisible when they take off. That would make them much more difficult to tell.

It changes but this year my favorite is Green tea with mint and a bit of honey. The green tea gives a bit of energy that is a nice pick-up and the mint sort of zings in my mouth with a refreshing wake-up. I don’t always take it with honey – but the sweet is nice as well.

A week or two on the Oregon Coast with some of my brothers and sisters. We have done it a couple of times and it was crazy fun. I love getting together with my family with or without their kids. At Waldport, Oregon, the sea lions spend a lot of time on the beach with their young ones and it is fun to walk by and see them. You can actually get quite close before they take to the water.

Well, definitely Aminta. Aminta is a guardian dog – sort of like an Angel. She can fly and turn invisible and is very smart. I’m sure she would find a way to get me off of that island in no time.

One dream I have had is to open a half-way house for women coming out of addiction rehabilitation. Not a large house perhaps for 5-10 women for low income who could stay up to a year for getting their lives back in order. I have gone through rehab myself and it takes a long time to get turned around.

Poetry. I actually loved this class so much that I asked if I could take it again and was allowed even though I got an A the first time. When I was in the third grade that is what I wanted to be when I grew up. A poet. I sort of fell in love with "The Owl and the Pussy Cat went to Sea" and was hooked after that. Both of my parents liked poetry and that definitely played a part in my love for it.

When a mysterious cave is found by ten year old Michael and his cousin Emma they are excited. But the cave is not an ordinary cave and the hidden secrets inside that cave are more than they bargained for.

Michael and Emma soon find themselves involved in a dangerous series of events that cause them to join forces with the hidden cave dwellers in order to order to rescue a small boy with a huge secret.

Do not be afraid. Caden grabbed tighter onto Aminta’s fur as they sailed through the midnight sky of a thousand stars. Do not be afraid. He closed his eyes and whispered the words again as he buried his face into the warm and heavily furred, ruff of the dog’s neck.

From the minute, he had been grabbed in the night by silent strangers he had been afraid. A rough hand had smothered his mouth with a cloth so he wouldn’t scream but he had struggled and tried so hard to cry because he was, no matter what his mom had told him. Afraid.

He was safe now though. For the moment. Big dog had saved him. His mom had told him he would, that he should not be afraid. But it was hard not to be afraid.

What if they found him again? 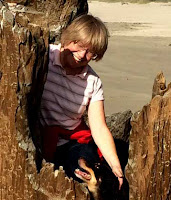 Patricia Grasher is my pen name for the series, My Dog Can Fly. It’s my pretend name. The name I write when I enter a world of magic and adventure. Where anything can happen and often does.

I am now doing what I have always wanted to do. Write books for children. Like Peter Pan a certain part of me has ‘refused to grow up’ and writing allows the fantasy to bloom and grow. My first book, My Dog Can Fly will be out in March 2016. Getting close!

In my ho-hum real life my name is Patricia Proctor. I live in Vancouver, Washington with a giant big dog named Andre who plows through the house and expects everyone to step aside because he is coming through. Pudge my little dog who wants to be first but realizes this is not always possible around Andre. (He squeals if Andre gets too close as he has been run over a few times too many.) And finally there is my cat, Buddy. He is really the brains of the outfit. Being smart he waits until the thundering herd (my nickname for Andre) passes through and then pretty much does whatever he wants. Sleep, chase squirrels, fights off other cats who dare to trespass into his yard, etc.

Looking back in time I have done a number of silly and amazing things. I spent four years in the U.S. Navy as a Cryptologic technician, getting into all sorts of trouble in Iceland and Germany before being sent back to the United States and told to be a good sailor. Straighten up and sail right. Which I sort of did. After my service was over I bummed around for a couple of years and then joined a monastery in Spokane, Washington. I was a nun for 30 years living a good life with some wonderful sisters. I published 5 books, ran a full time AM radio station from the fourth floor and had a large internet ministry that was recognized at one point by USA Today. I actually managed to live a pretty active life for a contemplative nun.

My life changed in 2009 when things inside my head and outside no longer seemed to fit. I went through a lot of counseling and came up with the decision that being a nun was no longer the best for me. In 2011 I was officially give the okay from Rome to return to lay life. My time in the monastery was wonderful it just wasn’t for forever. God does call us to new adventures all the time. My latest adventure is writing this children’s action fantasy book.

The book is FREE on Amazon.