Q&A with L. S. O'Dea, author of the LAKE OF SINS series

This post is part of a virtual book tour organized by Goddess Fish Promotions. One randomly drawn commenter via Rafflecopter will win a $50 Amazon/BN Gift Card. Please click on the tour banner to see the other stops on the tour.

Welcome to Books in the Hall and thanks for answering some of our questions. What group did you hang out with in high school?

What are you passionate about these days?

I am passionate about animal rights. I do not believe that animals were put here for us to dominate. Even though I am a Catholic, I do believe that animals have souls just like us. If you have a dog, look into his or her big brown eyes and tell me you don’t agree about the soul thing.

If you had to do your journey to getting published all over again, what would you do differently?

I wouldn’t waste my time trying to find an agent. When I went to school, that was the only way to get published. I wasted a lot of time changing my story per some agent’s request never to hear back from her. Once I did some research and realized that even if my book was picked up by an agent and publisher I’d still have to do the marketing, I decided that was enough for me.

Ebook or print? And why?

I like to have my books available in both formats although the ebooks sell more. However, there is still something more “real” about the accomplishment of finishing a book when you hold it in your hands. As far as what I like to read – I’m old fashioned. I like print.

What is your favorite scene in this book?

In Escape, my favorite scene is when Gaar tells Trinity that she is “more than a Producer.” This is the first time that she truly realizes that she is good enough. She’s spent her entire life hiding and being ashamed about her differences. In this scene, she starts to realize that being different does not equate to less.

In Secrets, my favorite scenes are the ones with Hugh and Tim. I love the way that they bicker and argue. You only do that with someone who you really love, like family or very close friends. I think it tells a lot about their relationship. Plus, I find it funny.

In a world where class distinction means the difference between imprisonment and freedom and even life and death, being chosen to stay in the encampment and breed is the only way to guarantee survival for a teenage Producer.

Every year after harvest, the finest examples of teenage Producers are assigned mates; the rest are loaded onto carts and hauled away, never to be seen or heard from again. Trinity, a sixteen-year-old Producer, knows that she has no chance of being chosen to stay. She isn’t even full-blooded Producer. Her father is a House Servant and she’s spent her entire life hiding her differences, especially her claws and fangs.

She has one week to sneak into the forest and discover what happens to those who are taken. Her plan is simple, but she doesn’t count on being hunted and captured by predators long believed to be extinct. Can she elude her captors to uncover the fate of her kind and return to camp before her escape is discovered? 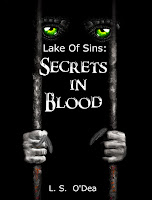 Trinity's plans have gone horribly wrong and she is now fleeing for her life, but at what cost to her friends and family. Can she save any of them without sacrificing herself?

Hugh Truent, an Almighty, learns of Trinity’s escape and that she is the offspring of two different classes which is supposed to be impossible. If it’s true, it would be the discovery of a lifetime, but he needs scientific proof. In his quest for answers, he soon realizes that there are those who will kill to keep this find a secret.

Trinity’s struggle to survive in a society based on absolute segregation of the different classes along with Hugh’s dogged determination to find the truth at any cost, sets into motion a collision between the groups that shatters the foundation of their world.

Read an excerpt from ESCAPE

She ran blindly away from the sound of the Guards, her backpack slamming against her spine with each stride. If they catch my scent, they will find me. She skidded to a stop. The forest had ended. A rock wall loomed in front of her, stretching to both sides as far as she could see. Little crevices and divots peppered the wall, but it was too steep to climb. She had to make a choice. The wrong one would cost her freedom, maybe her life.

The trees rustled behind her. Too late. They found me. This had all been for nothing. Now, the best she could hope for was to be taken with the others. Her chest tightened. She had to make sure that her mom and Remy weren’t punished because she escaped. She raised her hands to her shoulders and slowly turned. Her breath caught in her throat. A Tracker, the deadliest of predators, stood on its back two legs, towering above her, front legs hanging down like arms. Brindle fur covered its body and its eyes glowed yellow in the shadowed forest. Its tongue lolled out the side of its mouth, exposing a row of sharp teeth on the other side. Someone should tell it that they no longer exist in the wild.

About the Author: L. S. O'Dea grew up the youngest of seven. She always wanted to do what her older siblings were doing, especially reading stories.

Ill at a young age, she immersed herself in books. Her life changed when she read a short story written by her older brother and realized that normal (somewhat anyway, since her brother was a bit weird in her opinion) people created these amazing stories. From that day forward, she wanted to write.

However, as with all good stories, obstacles rose in her path (mostly self-created obstacles) and it took her many years to put finger to keyboard and type her first book.

The first book of the series is on sale for $0.99 until the end of the tour.