This post is part of a virtual book tour organized by Goddess Fish Promotions. Mia will be awarding a $20 Amazon or B/N GC to a randomly drawn winner via rafflecopter during the tour. Click on the tour banner to see the other stops on the tour.

For weeks, Lennon pesters Fin, who like Lennon admits to questioning his sexual orientation, for a commitment to spend twenty-four hours together exploring “the gay side of life.” Fin reluctantly agrees. Each boy will seek to answer the daunting question, Am I gay? Lennon pre-plans the day, filling the hours with what he assumes “gay life” is all about: shopping for fashionable clothing, indulging in lavish dessert crepes, boogying to Taylor Swift’s “Shake it Off”, and yes, listening to show tunes.

However, Lennon quickly realizes that in creating his plan he has succumbed to the most common and distorted of gay stereotypes. Can he be gay and not fit them? And more importantly, is it possible that spending one very hard day and night together will help Fin accept that he’s gay, too? If so, maybe Lennon has a shot at winning the heart of the boy of his dreams.

“A Hard Day’s Night” is an amusing young adult contemporary romance about two boys who seek to discover if they must fulfill stereotypes to be together.

In the end, maybe all you need is love.

Enjoy an excerpt: I park directly in front of the salon.

“The Best Little Hair House in Westfield?” Fin looks at me incredulously but doesn’t dish out a criticism. My dear friend Fin has great difficulty with that whole “calling it like he sees it” thing.

“I didn’t name the place,” I mutter as I jump out of the Jeep. After shaking his curly blond head a couple of times in what-did-I-get-myself-into disbelief, Fin does the same.

I’ll be sorry to see those pretty curls on the floor of the beauty salon, but we’re gonna endure our mutual makeover, one way or another.

In my opinion, having mutual makeovers spells togetherness as well as exploring our more feminine sides. “Come on. We have both of the salon’s haircutters booked for the next hour.” Then I mumble in a manner designed to be intentionally incoherent, “And we have a makeup artist for the following forty-five minutes....” Fin doesn’t hear this part and I think it’s for the best.

“Daaahlings, you must be Lennon and Fin....” Richard, I assume, since I recognize his sing-song voice from the phone call I made to set up our appointments, greets us at the door, air-kissing me and Fin, on both cheeks. I know immediately that if my goal is to immerse Fin and me in all things homosexual, we are in the right place. I find it hard to tear my eyes off Fin as he checks out the salon. I’ll sum up the salon’s décor like this: rainbow-glitter-velvet-jelly bean-explosion. And I’m pretty sure that Fin, coming from a lifestyle enhanced by the subtle shades of Williams-Sonoma and Restoration Hard- ware, has never laid eyes on anything quite this... this vibrant. And Richard’s lilting voice one more time sings out proudly, “Welcome to the Hair House!”

At this point, Fin, with extremely wide eyes, checks out the slick-haired narrow-eyed man who is going to beautify him. Not that Fin needs any enhancement in that department, whatsoever, because even if I weren’t gay, I’d recognize that Fin is a stunner. “I... um... thank you,” he says and offers his hand, which Richard grasps, lifts dramatically to his lips, and kisses very slowly.

“And I must insist that you call me Chard—all of my dearest friends do,” the stylist utters, a glimmer of hopefulness blatant in his sly, dark eyes.

Fin’s lips move but no sound comes out. He’s probably trying to formulate the words for what he is thinking: Are you kidding me—you call yourself Chard? Hahahaha!! But with no success, as Fin, like I mentioned before, has trouble with calling upside-down black heart shapes with tiny stems what they are—yeah, spades. 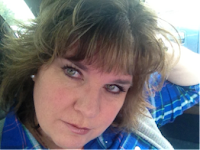 Mia Kerick is the mother of four exceptional children—all named after saints—and five nonpedigreed cats—all named after the next best thing to saints, Boston Red Sox players. Her husband of twenty-two years has been told by many that he has the patience of Job, but don’t ask Mia about that, as it is a sensitive subject.

Mia focuses her stories on the emotional growth of troubled young people and their relationships, and she believes that physical intimacy has a place in a love story, but not until it is firmly established as a love story. As a teen, Mia filled spiral-bound notebooks with romantic tales of tortured heroes (most of whom happened to strongly resemble lead vocalists of 1980s big-hair bands) and stuffed them under her mattress for safekeeping. She is thankful to Dreamspinner Press, Harmony Ink Press, CoolDudes Publishing, and CreateSpace for providing her with alternate places to stash her stories.

Mia is a social liberal and cheers for each and every victory made in the name of human rights, especially marital equality. Now marital equality is the law of the land!! WOOT!! Her only major regret: never having taken typing or computer class in school, destining her to a life consumed with two-fingered pecking and constant prayer to the Gods of Technology.

Stop by Mia’s Blog www.MiaKerick.com with questions or comments, or simply share what’s on your mind.