From To Kill a Mocking Bird, The Outsiders, and The Lost Boys to Harry Potter, Hunger Games, and Divergent, YA Fiction pulls the reader in, and if done well enough, doesn’t let go.

Eighteen-year-old Stedford would see a pile of ragged notebooks filled with sketches for all kinds of techno gadgets and software code scribbles stacked beneath a pair of ratty hi-top red tennis shoes faded to pencil-eraser pink.

Black Beauty, Beautiful Joe, then later Interview with a Vampire and Carrie because all elicited emotion and promised and delivered on worlds and characters that stayed with me even after I read the books.

If you want to write, claim every 15 minutes that you can and write.

Mini candy bars (of the chocolate persuasion, of course).

Candy, specifically lots of chocolate of course because, well... Do they make coal-shaped chocolate candy? Hmm. If so, that would be the ticket!

The books in the Children of the Elements series feature children that are able to direct the wind, earth, fire, water, and the lesser known element the void. Savage Winds is the first book in the series and features a little girl able to control the wind. Can you imagine influencing the direction and force of the wind with the flick of a finger or a twist of the wrist? Being able to whip up tornados and calm hurricanes—now that would be one awesome superpower!

What book is on your nightstand currently?
Blake Crouch’s Wayward Pines series and well as Jodi Picoult’s Between the Lines.

I very much enjoyed the level of writing in the Hunger Games as well as the pacing of the trilogy.

A paranormal based show, such as Ghost Hunters or The Haunting of... (My next book is based on this concept and features teens on a ghost busting reality show and their haunting adventures.)

I’ve always gravitated toward the oldies, such as Twilight Zone and Star Trek.

Savage Winds, Book 1, YA Sci-Fi Adventure Series, features children that control the elements, the chaos caused, and the apocalyptic disasters set in motion.

Hot cocoa, because it’s the closet thing to liquid chocolate.

Quiet, with lots of writing time, in any locale at all.

Scientist Nora Hicks, who starts out the series as an unwilling subject and accomplice to the Top Secret Project featured in the Children of the Elements series. Over the span of the series, Nora grows...or more or less devolves...into an even more interesting character.

Jack Sawyer from The Talisman by Stephen King and Peter Straub, Odd Thomas from Dean Koontz Odd Thomas Series, Katniss from Suzanne Collins’ Hunger Games, and Alex from Ilsa Bick’s Ashes trilogy. That would be one interesting dinner conversation.

Eighteen-year-old techno-geek Stedford Thackett because Stedford has a knack for creating gadgets and figuring out how to make items that might need for survival. He’s clumsy, but makes up for his physical and social awkwardness with his smarts, his caring, and his perseverance. Stedford’s POV encompasses the entire series as he grows from a nerd pulled into a real life conspiracy to a nerd struggling to survive in a pre-, current, and post-apocalyptic world.

Canadian bacon or ham with extra pineapple and cheese.

My nieces’ and nephew’s college tuition, a business set-aside fund for all three, a creative writing online workshop hub that teaches the how-to’s and the writing craft at a reasonable cost and delivers lesson- wise, then I would invest in rental properties to generate a continual income.

Rainstorm soundtracks all the way.

Do vampires and ghosts count? Hmm...

Literature/English, which was the closest thing a small town high school offered to creative writing.

In Author R.J. Merle’s whirlwind start of the Children of the Elements series, a clumsy teenage techno-geek struggles to protect kidnapped children from a covert government organization responsible for creating their abilities to control the five elements.

Eighteen-year-old Stedford Thackett’s conspiracy theorist brother ensnares him in a real life children-as-weapons plot, while a determined scientist grooms happy-go-lucky five-year-old Darcie Lynn Carpenter to use the wind as a deadly weapon.

Despite the firm hand of Scientist Nora Hicks, Stedford struggles to rescue the kids and escape, even as Darcie Lynn fights to gain control of the surging power of the savage winds.

In an office deep inside an East Tennessee mountain, Nora snapped a black leather-bound book closed.

Except for the carved stone ceiling, the office mimicked a non-descript working office in Anywhere, USA. Bulky military-issue metal and wood furniture stood as a harsh legacy to the covert Secret City project and to the starkness of her life.

Sitting at the borrowed hulk of a desk in a dank underground office, she asked, “Why was this kept from me?”

Across the desk in a guest chair, General Gardner, with thin hair sprouts sprayed into place, said, “Ever since Oak Ridge existed but did not even appear on a map, the city continues to hold and foster more than its share of secrets. As a trusted senior scientist and manager of the project, Dickenson claimed you and your son were the only ones involved.”

“How long have you known there were more of us?” Her grip on the desk’s metal edge forced her gloved hands to stop shaking. The usual underground chill pressed into the heat of her temples and an off-putting tartness oozed over her tongue.

Were Scientist Daniel Dickenson not already dead, she would kill him with her bare hands. 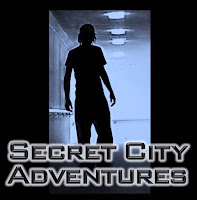 Author R.J. Merle stepped out of the realm of Top-Secret documents (shh, don’t tell...) to write sci-fi and paranormal fiction.

R.J. survived and escaped both the entertainment field and the government-contracting environment, craves the Walking Dead, and entertains what-if tidbits about “supposed” technological and biological advances.

No stranger to the goings on in the city of Oak Ridge, Tennessee, R.J. Merle blends a down- home flavor with a former in-the-know—hypothetically, of course—technical background to craft the twists and intrigue of Secret City Adventures.