Spotlight and Giveaway: Vanished from Dust by Shea Norwood

This post is part of a virtual book tour organized by Goddess Fish Promotions. Shea Norwood will be awarding a $25 PayPal, Amazon or BN GC via rafflecopter. Click on the banner to see the other stops on the tour.

A CHILL RUNS THROUGH HIS SKIN AS THE PHANTOM APPEARS.

Eric Stark is not insane. Or at least he doesn’t think so. He wishes everyone in Dust, Texas, felt the same way. But that’s not going to happen since the whole town thinks he’s crazy. Why didn’t he keep his mouth shut?

No one understands. Eric is alone as he battles his sanity in a town of tormenters. Suddenly a new friendship emerges after the new kid, Kyle Barrett, moves to town.

Eric reluctantly reveals his secret. Is it a curse or a gift? He isn’t certain, but with Kyle by his side he finds the courage to seek the truth.

They soon realize that something sinister is descending on the residents of Dust.

Is it caused by Eric’s phantoms or is it something else? Is it connected to the mysterious death of hundreds of townspeople over sixty years ago? One thing is certain—only Eric and Kyle can save them.

They set out on a heart-pounding adventure and find themselves transported to a disturbed and deserted version of their small southern town. They quickly discover that this new world has mysteries of its own to uncover. What they find could prove more than they bargained for, and it only leads to more questions. Eric and Kyle must face a horrifying fact—they may never get out alive.

Will they survive their encounter with these dark and mysterious beings?

Will they find a way back home?

Or will they be lost forever?

The Vanished from Dust series is perfect for anyone who craves a hair-raising thriller packed with mystery and suspense. This paranormal story for young adults can be compared to Stand by Me, mixed with Odd Thomas, and a twist of The Dark Tower.

“Anyone there?” A large man asked in a loud and forceful voice.

Kyle peaked over the hedge and ducked down quickly. “I think he saw me.”

“No way,” Eric said, his heart still pumping hard in his chest. He edged his head over the hedge.

There was no one at the door.

Seconds later the light went out.

“He went back inside.” Eric stood up, ready to leave.

“Let’s go do another one.” Kyle walked into the street. “This time it’s your turn.”

A porch light came on without warning.

Eric thought of his mantra to run instinctively but froze instead as a large man darted outside with amazing speed for his size. He was pointing a shotgun directly at them. They were standing in the darkness of the street just out of reach of the man’s vengeful eyes.

“Stop right there, you little pricks,” the fat man said in an authoritative tone.

The shotgun was still pointed at them. “I’m gonna call your daddies and tell ’em what you’re up to. Or better yet, shoot you with this salt rock I loaded just for punk kids like you who knock on my door in the middle of the night.”

“Screw that! He has a twelve gauge pointed at us.”

“What are your damn names?” The man, still in his overalls, stood in his yard. By now, his wife and two young children were among the audience.

The hammer on the shotgun pulled back, making a distinctive click.

“Run!” Eric shouted and bolted. He was reminded of Kenny Rogers’s well-sung advice, which correlated nicely with his innate nature to run when confronted with danger.

An ear-piercing explosion shot through the night sky as rock salt slammed into the road in front of Eric. It sounded like thousands of shards of glass crashing against the pavement all around him. 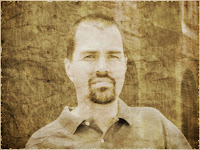 Shea Norwood is a West Texas native that currently lives in the DFW area with his wife and son. He's an avid reader and enjoys the craft of writing. The fictional town of Dust is loosely based on a small town south of Odessa, TX.

Buy the book at Amazon