Whispers in Autumn by Trisha Leigh - Virtual tour and giveaway 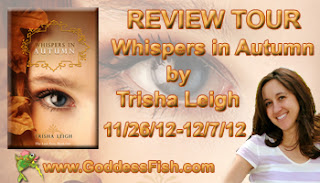 This review is done in conjunction with the author's tour with Goddess Fish Promotions. Trisha will be awarding two $5 Amazon Gift Cards and one $20 Gift Card GC to randomly drawn commenters during the tour, so leave your thoughts here and you're entered! If you want more chances to win, visit the rest of her tour stops here. 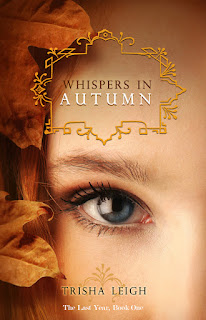 In 2015, a race of alien Others conquered Earth. They enslaved humanity not by force, but through an aggressive mind control that turned people into contented, unquestioning robots.

Except sixteen-year-old Althea isn’t content at all, and she doesn’t need the mysterious note inside her locket to tell her she’s Something Else. It also warns her to trust no one, so she hides the pieces that make her different, even though it means being alone.

Then she meets Lucas, everything changes.

Althea and Lucas are immune to the alien mind control, and together they search for the reason why. What they uncover is a stunning truth the Others never anticipated, one with the potential to free the brainwashed human race.

It’s not who they are that makes them special, but what.

And what they are is a threat. One the Others are determined to eliminate for good

My review:  First, I would be remiss if I didn't gush a bit about the cover with I love, Love, LOVE!!  Kudos to the cover designer, because I honestly asked to review this book based on the cover alone.

I am thrilled to say I loved this book as much as I did the cover. Seriously.  I could not put it down, read it while I was cooking, cleaning, eating, walking ... yes, I thought it was that good.

The author is crazy talented.  She truly paints a picture with her words and from the first line ("Before my eyelids crack open I know I’ve traveled again.") I was well and truly hooked.  Her characters, all of them, are well constructed and three dimensional -- a tough feat, really, since this is a book told in first person and frequently this means secondary characters aren't as fleshed out as readers would like. That's not the case here.  I was as interested in our protagonist, Althea, as I was in truly minor characters like Greg and Leah.  They were all unique individuals and I knew them all.

As clearly as I saw the people, the place was equally well drawn.  From cell to home to park and even the bowling alley, a full color movie played in my head as I read.  The plot was engaging and I've already told more than one person to GET THIS BOOK.  I'm heading over to see if I can get the next book in the series (and truly hope the author is writing frantically so I won't be left hanging long -- there are four seasons, but only two books released so far).

So, yes:  I give this five stars and a very enthusiastic recommendation!

Raised by a family of ex-farmers and/or almost rock stars from Northeastern Iowa, I’ve always loved to tell stories. After graduating from Texas Christian University with a degree in Film, I began to search for a way to release the voices in my head. IWhen I attempted my first YA novel, which would become Whispers in Autumn, I was hooked. I knew then my heart lay with telling stories about and for young adults, and for anyone who loves to read and recapture those fleeting “first” moments.

My spare time is spent reviewing television and movies, spending time with my large, loud, loving family, reading any book that falls into my hands, and being dragged into the fresh air by my dogs Yoda and Jilly.

WHISPERS IN AUTUMN, my post-apocalyptic YA novel, is available for
Kindle: http://www.amazon.com/Whispers-Autumn-Last-Year-ebook/dp/B008NFVDTQ/ref=sr_1_1?ie=UTF8&qid=1343871707&sr=8-1&keywords=whispers+in+autumn